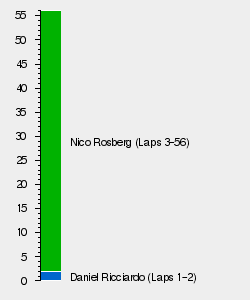 For the Grand Prix, super soft, soft and medium tyres were used.[2]

After the criticism of the new "elimination" qualifying format used in the first two races, the old format was brought back in China.[3]

Passing a medical test on 14 April 2016 following his injuries from the Australian Grand Prix, Fernando Alonso was allowed to compete in the first practice session of the Chinese Grand Prix,[4] though he had to pass a second medical test afterwards to see if he was fit to take part in the rest of the Grand Prix weekend, which he successfully passed.[5]

Lewis Hamilton was given a five-place grid penalty for changing his gearbox, after Mercedes found that his first gearbox was damaged after Valtteri Bottas collided with him in Bahrain. They decided to change the gearbox straight away because they thought it would be easier for Hamilton to overtake on the Shanghai International Circuit than on the next few circuits.[6] Hamilton replied: "Of course when you hear on the Wednesday morning that you're arriving at the weekend with a penalty already, that changes the approach to the weekend, your mind set. But for me a challenge is an opportunity to rise, so I'm really excited about this opportunity, from where I'm going to start hopefully in the best possible position with the penalty. I love racing, and it's a race this weekend - rather than being at the front and have less of a race. It's going to be an easy weekend for Nico for sure. But it doesn't mean I can't give him a good run for his money from wherever I start. I'll be pushing as hard as I can... It doesn't mean I can't win the race still, which is my thought process, rather than damage limitation."[7]

Williams had several tyre issues, first shown when Felipe Massa spun after his left-rear tyre went while approaching Turn 6, and causing debris and gravel to gather across the track, bringing out the red flag after 25 minutes had passed in the session. Massa was able to go out again, but his left-rear tyre failed again, leaving him unable to set a time in the session, being 22nd. These two tyre failures were confirmed by Pirelli to be technical issues, although they could not immediately find the same reason for when Kevin Magnussen had a left-rear tyre failure on the back straight, again bringing out the red flag. Esteban Gutiérrez was also unlucky, receiving an electrical problem before he could set a time, and had to head back to the pits after doing just two laps. Nico Rosberg set the fastest time, being 1m 37.133s, which was 0.146 seconds quicker than Lewis Hamilton's time, due to that Hamilton did not do a good second sector, as well as having two spins throughout the session.[8]

Sebastian Vettel was the only other driver to get within one second of Rosberg's time, finishing third in the session, while his teammate Kimi Räikkönen was fifth, between Daniel Ricciardo and Daniil Kvyat respectively. Following behind was Carlos Sainz, Jr. Meanwhile, on a set of supersoft tyres, Jenson Button went eighth fastest, while his teammate Fernando Alonso was twelfth.[8]

Gutiérrez's bad luck continued when a problem occurred on his brake-by-wire system, causing the brakes to seize and catch fire. He was 21st in the session,[9] but could not compete any further, having done only four laps. Meanwhile, Magnussen did not take part in the session, due to the Renault team still trying to figure out what caused his tyre failure in FP1.[10] After FP2, this was revealed to be a suspension failure, while Massa's was due to the rear brake ducts' new vanes not having sufficient clearance, resulting in the vanes coming out of the wheel rim's inside.[11] Massa was able to finish fourteenth in the session.[10]

At the start of the session, Button was fastest, until Rosberg went faster on supersoft tyres. Hamilton followed, but going wide at Turn 6 meant his time was slower than Rosberg's. Vettel then went faster than Rosberg on supersoft tyres, before Räikkönen took the fastest time of the session. Meanwhile, Ricciardo, Max Verstappen, Nico Hülkenberg, Sainz, Sergio Pérez, Valtteri Bottas and Alonso all overtook Button, respectively.[10]

When the third session started, Bottas was second fastest while a heavy rainfall was occurring, with Pérez, Sainz and Gutiérrez. Räikkönen was the fastest, using a set of full wet tyres, but as the weather conditions improved, Vettel went fastest on intermediate tyres within the final fifteen minutes. Romain Grosjean was the only person to spin during the session, but was unable to set a time after his car was missing its telemetry, while Ericsson's car had a technical issue. The drivers of Mercedes, Red Bull and McLaren also did not record times, wanting to keep their intermediate tyres for qualifying. Despite getting his right-rear tyre punctured at the beginning of the session, Palmer was able to finish sixth, while teammate Magnussen finished seventh. In the end, Räikkönen was twelfth.[12]

Before Q1 started, the track was still damp, having a puddle on the start/finish straight. As the session started, most of the drivers went out on intermediate tyres, while the Manor drivers used supersoft tyres. However, during his out lap, Hamilton reported of a power unit problem, and came back into the pits before he could set a time. Meanwhile, on the very start of his first flying lap, Pascal Wehrlein skidded upon hitting a bump hidden beneath the puddle on the start/finish straight, causing his car's left side to hit the barrier, and bring out the red flag for twenty-two minutes. Wehrlein said in response over the radio: "Sorry guys, no chance to do anything." When the session restarted, Vettel set the fastest time on supersoft tyres, followed by Räikkönen, Bottas, Button, Sainz, Rosberg and Ricciardo.[16] Meanwhile, Mercedes found that Hamilton's car had a problem with its Electric Recovery System, but could not get him out again in the session, meaning Hamilton was qualified in last place, the first time he failed to get through Q1 since Hungary in 2014.[17] The other drivers knocked out in Q1 were: Magnussen, Gutiérrez, Palmer and Haryanto, while Wehrlein was 21st.[16]

Once again, the Ferraris were fastest, with Vettel being the quickest ahead of Räikkönen, while Rosberg was third on a set of soft tyres, which were the ones chosen for him to use at the start of the race. Before the last minute of the session, Hülkenberg stopped his car beside the track, after his left-front tyre came off, leaving him in tenth place. The red flag was brought out, with not enough time for anyone to improve afterwards, preventing Massa from getting into the top ten. He was left eleventh, while Alonso and Button were both frustrated, qualifying twelfth and thirteenth respectively. Grosjean, Ericsson and Nasr were the next three drivers knocked out of Q2.[16] Hülkenberg was soon given a three-place grid penalty for being released unsafely, dropping him down to thirteenth.[18]

At first, Rosberg was fastest with a time of 1:36.111 on a set of supersoft tyres. Räikkönen then went quicker, while Ricciardo was third fastest. Vettel, meanwhile, decided to stay in the garage at that time and do just one run in the final minutes of the session. On his second run, Rosberg improved his time, putting him into pole position. Ricciardo then went second, while Räikkönen went a bit wide at the hairpin, leaving him third, while Vettel qualified fourth, ahead of Bottas, Kvyat, Pérez, Sainz and Verstappen.[16]

As the lights went out, Ricciardo had a slightly better start than Rosberg, overtaking him at the first corner. Kvyat made a good start compared to the Ferraris, trying to go past them at the first corner. Vettel tried to avoid Kvyat, but in doing so, he made contact with Räikkönen, damaging each other's front wings.[22] Both were able to continue, but Vettel dropped down to eighth, while Räikkönen was dropping down to the back of the field.[23] At the same time, Ericsson went into Grosjean, damaging the latter's front wing, and making his start terrible on his thirtieth birthday.[24] Nasr swerved to avoid Räikkönen as the latter came back onto the track,[25] but Nasr collided with Hamilton. Nasr's front-right tyre was damaged, while Hamilton's front wing went underneath his car, creating further damage that caused him to lost some downforce, and made all of his sets of tyres unable to last for so long. Hamilton, Räikkönen, Grosjean and Nasr all came into the pits to change their front wings.[22][24]

After the race, Hülkenberg was given five-second time penalty and two penalty points for going at an unnecessarily slow speed at the pit entrance.[26] However, it did not affect his race results. Force India was also fined €5,000 for releasing Pérez from one of his pit stops in an unsafe manner.[27]