Formula 1 Wiki
Register
Don't have an account?
Sign In
Advertisement
in: 2016 Grands Prix, British Grand Prix, Formula One races in the United Kingdom 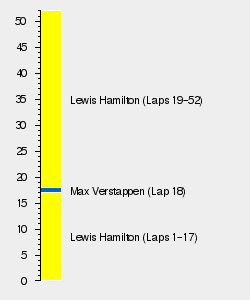 In qualifying, Lewis Hamilton took his fourth pole position at the circuit, ahead of Nico Rosberg and Max Verstappen. The race started under the safety car, with a damp track following a short rainfall that occurred before the race. Hamilton went on to win the race, his fourth British Grand Prix win. Rosberg originally finished second, but race stewards penalised him due to the Mercedes team giving him disallowed advice on the team radio. As a result, Verstappen, who was originally third, moved up to second, while Rosberg was pushed down to third.

Before the Austrian Grand Prix, Charles Leclerc was announced to compete for Haas in the first practice session of the British Grand Prix, alongside practice sessions of several other Grands Prix later in the season.[2] Four drivers were even confirmed to take part the test following the British Grand Prix: Sergio Sette Camara, Santino Ferrucci, Nikita Mazepin and Pierre Gasly.[3][4][5][6] Sauber, meanwhile, confirmed they would not take part in the test, saying that "cost effectiveness" prevented them from making an aero package at the time.[7]

As part of the rules of the season, a third dry compound would be included for each Grands Prix. For the British Grand Prix, the soft compound was chosen, alongside the medium and hard compounds.[8]

During the final lap of the Austrian Grand Prix, Mercedes drivers Lewis Hamilton and Nico Rosberg collided as Rosberg did not turn in hard enough while Hamilton was the outside, though it did not put them out of the race like in Spain.[9] In response, Toto Wolff demanded that team orders be used in the future.[10] However, Hamilton, Bernie Ecclestone and Damon Hill all disagreed, saying it would not make the races so exciting for the fans.[11][12][13] Eventually, Wolff decided that the Mercedes drivers shall race without any team orders, but with "strengthened rules of engagement",[14] along with giving the drivers a final warning.[15]

Alongside Leclerc, Esteban Ocon was announced to take part in the first practice session, driving for Renault.[16] Kimi Räikkönen's contract was extended to the end of 2017,[17] while Williams said that they would leave their doors open for Felipe Massa and Valtteri Bottas in 2017.[18]

Laurent Mekies was also confirmed to take over the role of race director from 2017, after Herbie Blash was announced to leave at the end of 2016.[19] Pirelli also revealed details about their test on tyres for 2017,[20] while the second challenge of the 2016 F1® Connectivity Innovation Prize was announced by Tata Communications.[21]

After Austria, Daniel Ricciardo stated that he would hope he would better at the Silverstone Circuit than the Red Bull Ring, noting how he did not seem so competitive in the previous race.[22] McLaren revealed they would use an engine upgrade so to have bigger chances of them being competitive in the race in front of the home crowd.[23] Different crew members of selected teams also shared their different opinions on if their teams would be affected by the departure of the United Kingdom from the European Union, such as Wolff saying that it would be a "huge impact", and [24] and Vijay Mallya saying that there would be no problems with Force India because they are "largely British-centric".[25]