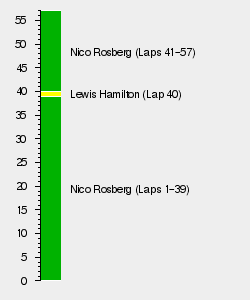 The same as the Australian Grand Prix, super soft, soft and medium tyres will be available.[2]

In the Australian Grand Prix, there was a lot of criticism on the "elimination" qualifying format.[3][4][5][6] Following the race, the sport's Strategy Working Group chose to keep it for the Bahrain Grand Prix, and do a further review afterwards.[7] As a response, Toto Wolff said: "We haven't found the right format with this change and it's hard to see how it might be more entertaining for the fans this weekend in Bahrain."[8] Sebastian Vettel stated that he is one of the people are disappointed,[9] while Lewis Hamilton said it is "strange [...], particularly because the most important thing is the fans were unhappy".[10] The FIA's president Jean Todt and Formula One's commercial rights holder Bernie Ecclestone are set to attend another meeting on race day to discuss the new qualifying format.[11]

Just one day before the Friday practice sessions, it was confirmed that Fernando Alonso would not compete, having been found out in medical exams to have had a partial pneumothorax (collapsed lung) and broken ribs following his accident with Esteban Gutiérrez in the Australian Grand Prix. McLaren's reserve driver Stoffel Vandoorne was confirmed to take his place.[12][13] Gutiérrez also had to have a new car built, as the first one was thought by the Haas team to be too damaged.[14][15] The Ferrari team were also able to save Kimi Räikkönen's combustion engine when the turbo charger failed during the Australian Grand Prix and caused the engine to set on fire. The team had been acting quickly to the scene, meaning that they did not need to use a second engine for Bahrain.[16] Alfonso Celis, Jr. was also confirmed to take part in the first practice session for Force India.[17]