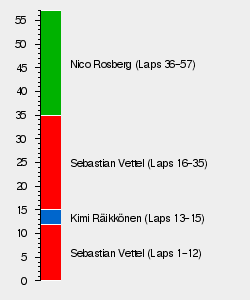 Hamilton took pole position in qualifying over Nico Rosberg. The new qualifying system was criticized, with many thinking that it was a bad idea. Christian Horner said it "not good for F1" and Niki Lauda felt that it was a big mistake. [1][2]

The first round of the 2016 Championship followed a winter of heavy development for all of the engine manufacturers, although the advantage seemed to be with Mercedes. Despite not setting any headline times in the eight test days, the Silver Arrows came to Australia as favourites having completed almost an entire season's race distance with only one mechanical failure.[3] Ferrari had closed the gap to ensure that the Mercedes would be under pressure, with the Tifosi and the Silver Arrows fielding unchanged driver line-ups.[3]

Elsewhere, Renault looked to have improved over the winter as did Honda, although both still appeared to be siginficantly down on power compared to Mercedes. Yet, even minor improvements were to the benefit of Red Bull, who would run under Tag Heuer branded Renault power for 2016, and looked set to battle with Williams, Force India (both Mercedes powered) and Toro Rosso (using a 2015-spec Ferrari engine) for third in the Championship. McLaren also looked in better shape with Honda than in 2015, although it seemed that the Japanese built engine would keep them near the back of the field.[3]

Sauber looked in relatively decent shape ahead of the weekend in Australia, having only tested their 2016 car for four of the eight test days after financial issues. They looked set to battle with McLaren and the reformed Renault team for midfield spots, while Manor Racing, sporting a new Mercedes partnership, and the new Haas F1 Team looked set to do battle at the back of the field.[3] That said, Manor were in the strongest position they had ever been in ahead of the first race of the season, while Haas had shown genuine pace in testing despite it being their first season, meaning points would be the ambition for both.[3]

Melbourne was also to see the debuts of three new faces to Formula One, headlined by 2015 DTM Champion Pascal Wehrlein at Manor. The Maltese born German was to do battle at Manor alongside Rio Haryanto, who would become the first Indonesian driver to compete in the World Championship. Also joining the fray would be former GP2 Series Champion Jolyon Palmer, the Brit joining the reformed Renault Sport F1 Team in place of Romain Grosjean, whom had moved to Haas.

Leaving F1 were Pastor Maldonado, the Venezuelan falling due to a lack of sponsorship payments, Will Stevens, Roberto Merhi and Alexander Rossi. The latter trio were dropped in favour of Wehrlein and Haryanto for a variety of reasons, although Rossi was retained as a test driver for them for the new season. Maldonado's seat was to be filled by Kevin Magnussen, the Dane departing McLaren after they opted to retain Jenson Button and Fernando Alonso, while the final seat available on the grid was filled by Mexican driver Esteban Gutierrez at Haas. The latter two were making their returns to the Championship.

The V8 Supercars Championship, native to Australia, was to fill its traditional role as a support series to Formula One, celebrating the twentieth anniversary of the Albert Park race's debut in 1996.[4]

The full entry list for the 2016 Australian Grand Prix is shown below:

A gloomy and overcast backdrop set the scene for the first practice session of the season. Heavy rain overnight, continuing into the early morning had left the Albert Park circuit heavily soaked. Sebastian Vettel in the Ferrari became the first man to venture out onto track on wet tyres. Vettel only went out for one scouting lap before returning to the pits.

Nico Rosberg who followed Vettel out the pits became the first driver of the season to set a timed lap. His lap was somewhat held up by Kevin Magnussen's Renault that exited the pits as he entered the first corner. Sergio Pérez whilst attempting to do a practice start, stalled his car at the exit of the pitlane. The Force India mechanics rushing up to the end of the pitlane to push him back to his garage.

After a couple of timed laps, Rosberg returns to the pits. Teammate Lewis Hamilton, also on intermediates ventures out. Nearly all the cars with the exception of Esteban Gutiérrez, Carlos Sainz, Jr. and Rio Haryanto have been on track to set installation laps.

Mercedes have been lapping competitively, between Hamilton and Rosberg, the duo have completed 19 laps. The Red Bull's of Daniil Kvyat and Daniel Ricciardo have set competitive lap times to put their cars just behind the Mercedes.

The track has gone quiet, the wet conditions providing little action. Fernando Alonso can be seen in intense conversation with his engineers and Ron Dennis.  Kimi Räikkönen takes over the top of the timesheets in his Ferrari ahead of the Mercedes cars. Teammate Vettel does another installation lap but pits his car yet again, he has yet to set a timed lap.

Gutiérrez is the only car to yet venture on track, his Haas being grounded with a technical problem. The two McLaren's venture back out onto track, both Button and Alonso are on soft tyres. Ricciardo follows them out on the medium tyre.

Sainz has been hounded by a technical problem upon leaving the track, the Toro Rosso moving around very slowly on track. His car grounds to a halt in the middle of the pit-lane, his mechanics rushing down the pitlane to push back Sainz's crippled car to their garage.

Ricciardo on the slick tyres sets the new fastest lap time, teammate Kvyat moves into second. Alonso is third whilst Button returns to the pits after one lap. It seems like it is time for slicks, the rain suddenly returns again. Hamilton who returned to the track on slicks was caught out at the wrong time and performs a big lock-up as the track gets wetter once again.

The two Renault's of Jolyon Palmer and Kevin Magnussen are on intermediates whilst the rest of the cars remain on slicks. Gutiérrez's car appears to be repaired and he finally heads out on track on intermediates. As the rain increases, the cars return to the pits.

Button returns to the track on intermediates, he sets the seventh fastest time whilst Verstappen in the Toro Rosso goes fourth. Verstappen pushing hard could be seen locking up at several moments on track. Gutiérrez sets the ninth fastest lap time, however reports an "inconsistency in power delivery" over the radio.

The rain has stopped and the sun has for the first time began shining through the clouds. Verstappen who returned to the track on slicks had a spin exiting turn 6.  Nico Hülkenberg who has also gone out on slicks sets the new fastest time of the session. Teammate  Pérez moves into third. Hamilton also on slicks, goes one second faster than the rest of the field. Ricciardo also on slicks move into second.

The brief moment of sunshine is gone again as the rain returns, the cars on track begin to slow down. Valtteri Bottas and Rio Haryanto both spin exiting turn 6. After going fourth fastest, the next lap Kvyat takes the fastest lap. This is short lived as Hamilton soon reclaims the top spot. Hamilton performing another big lock-up going into turn 6. Rosberg meanwhile is down in sixth position.

At turn 13, Räikkönen goes straight on whilst trying to make the corner. He spins the car and returns to the circuit. The circuit now becoming too wet for slicks sees the drivers return to the pits. Rosberg had been setting a purple first and second sector before abandoning his lap.

Vettel who still hasn't set a lap time, goes out for one more installation lap in the wet conditions. 30 seconds before the end of the session, Ricciardo spins off the circuit at turn 12 and beaches his car in the gravel. Ricciardo exits the car and greets his home fans before returning to the pits on foot.

The wet conditions creating an unexpected timesheet at the end of FP1. With the cars unable to demonstrate their true potential in the unpredictable conditions, the teams would still have to wait until later to get an understanding of the grid running for the new season.

For the afternoon session, the rain remained. As the session began, the rain began to increase in intensity. Most of the drivers were sitting in the pits waiting for the conditions to improve. Daniel Ricciardo on the intermediates is the first driver to head out onto track, after setting a couple of laps he returns to the pits. Following Ricciardo, teammate Kvyat and Rosberg's Mercedes are out on track. After Rosberg goes fastest, Kvyat then takes the fastest time the next lap.

Sainz then moves into second place with the Toro Rosso car. Rosberg who had yet to set a proper lap time, then goes on his first flying lap. However exiting turn 6, Rosberg loses the back end and slams into the wall. The front of his car is badly damaged, while he attempted to make it back to the pits. His team over the radio tells him to pull off the circuit by order of the FIA. Rosberg was running a new specification front wing with the S-Duct, the team notably only having a limited number of these new front wings. Interestingly the team did not run it in FP1 in fear of it getting damaged.

As this occurred, Sainz sets the fastest time, however soon enough the time was beaten by Alonso. The Force India's of Hülkenberg and Pérez move into first and second, before Sainz retakes the top spot. Pérez had nearly spun the car when he got a wheel on the grass on his quick lap.

Alonso and Ricciardo move into second and third. Räikkönen in the Ferrari finally shows his hand and moves into the top place. Button is pushing hard to go fifth, one place ahead of teammate Alonso. Vettel's Ferrari has been running quietly, he puts his car only in sixth position.

Gutiérrez sets the ninth fastest time in his Haas whilst also sharing a trip through the gravel on his run. He and Pérez go wide and off the circuit at turn one. Hamilton finally comes out on track and on his first flying lap sets the fastest time of the session before returning to the pits.

In the last 10 minutes of the session, Williams finally send its cars of Massa and Bottas out on track to set their lap times. Apart from the Williams cars, the rest of the field headed for the pits in the remainder of the session as the rain increased. The Renault's and Williams cars did not set competitive lap times whilst Verstappen and the two Sauber's did not even make it out on track.