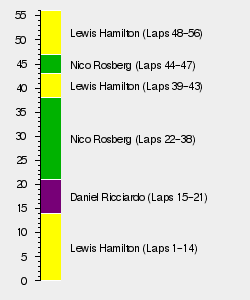 All of the teams used Pirelli's soft and medium tyres.[2] It was also announced shortly after the Russian Grand Prix that Bernie Ecclestone and Marco Tronchetti Provera had agreed for Pirelli to sign a new three-year contract.[3] In the driver market, there was official confirmation by Lotus F1 that Jolyon Palmer, the Brit who had been testing for them and had taken part in several practice sessions, would be driving for them in 2016.[4]

For the Grand Prix, Renault introduced a new engine for Red Bull and Toro Rosso to use, although they would have to take grid penalties if they do used them, due to the fact that they had gone past the limit of using up to four engines.[5] Daniel Ricciardo later said that Red Bull would not use the new engine in the race.[6]

Sebastian Vettel and Kimi Räikkönen were both given ten-place grid penalties for using a fifth engine, which would increase any hopes of Lewis Hamilton winning the Drivers' Championship if Vettel did not finish the race within the top two.[7]

The full entry list for the 2015 United States Grand Prix is outlined below: