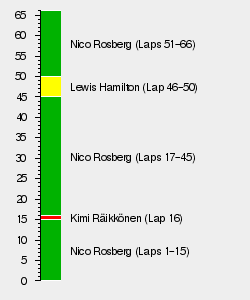 Medium and hard tyres will be used for the Grand Prix.[2]

McLaren have changed the MP4-30's livery for the rest of the season, starting with the Spanish Grand Prix, so to reduce issues with reflections from the chrome paint as well as to have its appearance optimised under both sunlight and floodlights.[6]

For the first time this season, the Grand Prix was supported by the GP2 and GP3 series.

Daniel Ricciardo used a modified engine, after the previous one malfunctioned at the end of the Bahrain Grand Prix. It had the aim of making improvements on reliability and driveability.[7]

People had been expecting Mercedes to win the race again when they had a big number of laps led in the 2014 race,[8] as well as being very competitive in the first and second tests at the circuit.[9]

Nico Rosberg finished the first practice session with the fastest time of 1:26.828, 0.070 seconds ahead of Lewis Hamilton. However, Rosberg went off one time at Turn 10, while there was a complain from Hamilton about understeer;[10] Additionally, Rosberg was reprimanded for crossing the white line at the pit entry.[11] Sebastian Vettel followed with Kimi Räikkönen behind. The two Ferrari drivers also had unhappiness when Vettel went off at Turns 1 and 10, and Räikkönen was angered by being sent out in a line of traffic. Toro Rosso had great results, with Carlos Sainz, Jr. fifth fastest, and Max Verstappen setting the sixth fastest time. They were both followed by Daniil Kvyat, who was ahead of Felipe Massa. Daniel Ricciardo had to miss most of the session when a throttle issue occurred during his first run, but was able to make another run at the end, getting ninth.[10]

Felipe Nasr was the last of the top ten, followed by Nico Hülkenberg. Raffaele Marciello took over for Marcus Ericsson in the session, finishing ahead of Jolyon Palmer, who replaced Romain Grosjean in the session. Valtteri Bottas was also replaced by Susie Wolff, who had her first run of 2015.[10] She stated afterwards, about the possibility of a female driver coming into Formula One racing after 40 years, that "If I did not think I was capable of racing at this level I would be the first to take myself out of the game. I 100% believe a woman can compete at this level."[12] The three test drivers were all followed by Fernando Alonso, who had a 360 spin near the end, but was able to keep going and set the fifteenth fastest time in his home country. His teammate Jenson Button was sixteenth, having complained about his engine's power.[10]

Sergio Pérez had a tough session, having finished with the seventeenth fastest time. Pastor Maldonado was eighteenth, after having more problems with his car. Will Stevens and Roberto Merhi were the last of the drivers in the results table.[10]

After he was beaten in the first session, Hamilton took the fastest time of the second session from Rosberg. Vettel was second, splitting both Mercedes drivers. Räikkönen was again fourth, and Kvyat moved up into fifth. Verstappen stayed in sixth place, and Button was surprisingly seventh for McLaren in their new livery. Bottas, whose car was driven by Wolff in the first session, set the eighth fastest time, while Sainz was dropped down to ninth compared to his result in the first session. Massa was tenth fastest, and Alonso followed after having a complain about his ERS not charging. Grosjean was twelfth, after he lost his rear bodywork on the main straight, which made a brief halt to the session. It took a while before Grosjean was able to go out again. Ricciardo again had to miss most of the session while his engine was being changed by the Red Bull team, but was able to do one flying lap at the end, taking thirteenth place ahead of Maldonado.[13]

Nasr and Ericsson were fifteenth and sixteenth respectively, followed by Hülkenberg and Pérez. Merhi was again led by Stevens.[13] Pérez was fined €1,000 for speeding in the pit lane.[14]

Rosberg went fastest in the third session with a time of 1:26.021, and Hamilton was also beaten by Vettel. Hamilton was also able to survive a hairy spin at Turn 3. Bottas was fourth fastest,[15] although he was later fined €400 for speeding in the pit lane.[16]

No further action was given by the stewards for Kvyat and Sainz's incident.[22][23]

It turned out that Alonso's brake failure was caused when the right-rear brake duct was blocked by a helmet visor tear-off.[24]