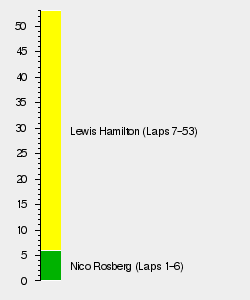 Unlike the previous year's event, soft and super soft tyres were used.[2]

The first practice session was shorter than scheduled, due to that a track cleaning machine had spilled diesel fuel sometime before the session's scheduled time. It took thirty minutes for marshals to clean the track before the session was actually started. When it did, all of the drivers went out, with Valtteri Bottas and Felipe Massa both going on wet tyres while the others went on intermediates. However, Sebastian Vettel complained during his first lap that the track was still not cleared, as saying: "What a mess!"[5]

No one switched to slick tyres until Marcus Ericsson, who put on soft tyres. However, it took twenty minutes for anyone to set a lap time, when Fernando Alonso set a time of 2:00.736, before going faster with 1:53.854. Twenty minutes later, Ericsson became the second driver to set a time in the session, being second behind Alonso. As the rain began to fall, Jenson Button became second fastest while running on soft tyres. With only fifteen minutes left, more drivers went out onto the track, with Kimi Räikkönen being left tenth at the end of the session following a spin at Turn 8, the turn which was most affected by the diesel spillage. Ferrari was later fined €1,200 for speeding in the pit lane twice.[6][7] The session ended with Nico Hülkenberg going fastest with a time of 1:44.355. Nico Rosberg followed him, with Vettel third. Lewis Hamilton finished seventh after having a spin at the penultimate corner on his final lap, which could have improved his time, and Massa had a spin in front of him at Turn 8, putting the Williams driver into twelfth place.[5] Bottas was also reprimanded after crossing the white line at the pit entry.[8]

Due to the heavy rain, several drivers did not decide to take part. Räikkönen, Romain Grosjean, Pastor Maldonado, Felipe Nasr, Will Stevens and Roberto Merhi stayed in the pits, while Rosberg, Ericsson, Hamilton, Sergio Pérez, Hülkenberg and Daniel Ricciardo did not set timed laps, leaving only eight drivers with timed laps. Massa went fastest with a time of 2:00.458, followed by Vettel and Bottas. After getting fifth place behind Max Verstappen, Alonso soon had a technical problem that made his car go slowly.[9]

The third and final practice session was dry unlike the other two, but Rosberg, Vettel and Räikkönen did not go out at the very start. At first, Kvyat was fastest with 1:46.856, but about twenty minutes later, Bottas went faster with 1:40.884, before having problems with the ERS. His teammate Massa then went second, but soon made a complain about the gear selections not working perfectly. The Ferraris eventually came out fifteen minutes later, with Vettel on soft tyres and Räikkönen on supersoft tyres. The latter went third to overtake Vettel in the session, but both of them were soon pushed down by Nasr, and later pushed out of the top ten. Rosberg went out in thirty minutes to set a time of 1:38.941 and overtake Bottas. He then set a faster time of 1:38.561. Meanwhile, Hamilton had lock-up on his first lap, but his next lap was clean, putting him up to third. The session was soon red-flagged when Sainz's car went out of control, hit the wall while approaching Turn 13, and went underneath the barriers. It was not restarted, leaving Rosberg as the fastest driver. Sainz was not seriously injured, and was taken to the medical centre, which he gave a thumbs-up to the camera to show that he was still conscious. At the hospital, he was soon confirmed to be okay, but did not have enough time to compete in qualifying. Speaking about the accident, Franz Tost believed that it was due to the steering wheel's brake shape being changed and more braking in the rear tyres which caused them to lock up.[10][11] The crash also led to the first 2015 Sochi GP3 race being postponed until Sunday, when the second race was also on.[12]