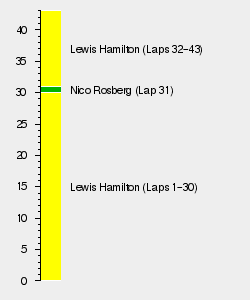 Lewis Hamilton leads the championship by 21 points ahead of this race. Nico Rosberg sits second with Sebastian Vettel third. Between them, these three drivers have won all ten races this season.

With nine pole positions so far this season, Hamilton will win the 2015 Pole Position Trophy if he secures pole here.

Soft and medium dry-weather tyres will be used for the event.[2]

After retiring from the previous race, Kimi Räikkönen was confirmed by Ferrari on 19 August to be one of their seats for 2016.[3] It is also Ferrari's 900th Grand Prix.[4]

Jolyon Palmer competed in the first practice session of the Grand Prix.[5]

FP2 was overshadowed by Nico Rosberg's rear left tyre blowing at high speed at Blanchimont. He saved his car from the barriers, but the session was red flagged and many drivers protested.

After Vettel's tyre failure, there began to be more concerns about Pirelli's tyres, which they said to the drivers on 4 September 2015 that they must not criticise their tyres in public.[9]