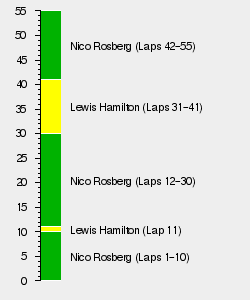 In the only driver change, Roberto Merhi returned to Marussia, replacing Alexander Rossi.

In qualifying, the McLarens appeared to have some pace and while Jenson Button managed to secure ninth in Q1, Fernando Alonso suffered a puncture on his key lap and thus was unable to secure a spot in Q2. More surprising was Sebastian Vettel's failure to progress from the first session, as he was unable to best his lap on the slower tyres. In Q2, Romain Grosjean's car suffered gearbox issues that saw his stop on track and eventually receive a five-place gearbox penalty.

For the final session of qualifying, it was a straight battle between the Mercedes drivers. Rosberg laid down the first marker, besting Hamilton's first attempt. As the chequered flag fell, Hamilton improved enough for provisional pole before Rosberg continued his fine form to post an even faster time to take his sixth consecutive pole position. Kimi Räikkönen restored some Ferrari pride with third while Sergio Pérez equaled his best qualifying result with fourth.

At the race start, Rosberg got off much better than Hamilton, who was forced to defend second place into turn one. Further back, Valtteri Bottas lost four places, and a touch of wheels between Alonso and Felipe Nasr sent Alonso into Pastor Maldonado, and the Venezuelan was forced to retire. Bottas' day got worse when he was released from his first pit stop into the path of Jenson Button and the Williams front wing hit the McLaren's tyre and Bottas was forced to complete the lap with a damaged front wing before pitting to change it.

Vettel, on the prime (soft) tyres slowly made his way through the field and even managed to as high as second before his pit stop on lap 24. During the second stint, Rosberg suffered from graining and thus Hamilton closed on his teammate, to nearly a second behind, before Rosberg made his second stop. Hamilton remained out for eleven more laps before pitting, and he was given the prime tyres, unlike Vettel who had two laps earlier put on the option (super soft) tyres. Räikkönen pushed on, setting a few fastest laps, while Vettel overtook Pérez for fourth place; a strong recovery given his starting position. Due to his strategy, Hamilton lost all the ground he made in the second stint and thus was unable to fully close the gap to Rosberg, who won by eight seconds, ahead of Hamilton, who managed to set the fastest lap, and Räikkönen finished in third place.

The result meant Hamilton's title-winning margin fell to 59 points to Rosberg, with Vettel 103 behind. Mercedes managed to break their points record from the previous season, scoring 703 points.

Heading into the final race of the weekend, both championships had already been decided with Lewis Hamilton and Mercedes leading the championship in their respective championship. But several positions in the championship hadn't been decided with the highest of those being for fourth with Valtteri Bottas having a one-point advantage over Kimi Räikkönen while Williams teammate Felipe Massa could still finish in 4th as he was 19 points behind the Fin. All of the teams used super soft and soft tyres.[2]. After the previous race in Brazil, the 2015 Race of Champions was held with Sebastian Vettel defeating Tom Kristensen in the final at London.[3] Vettel wasn't the only Formula One driver with eight drivers formerly or currently driving in Formula One.

The full entry list for the 2015 Abu Dhabi Grand Prix is shown below: