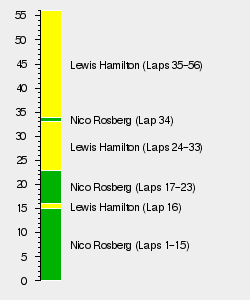 With both Caterham's owner and Marussia entering administration in the preceding weeks, only eighteen cars competed in the race.

The race was won by Lewis Hamilton from second on the grid. It was his fifth win in a row, and left the British driver 24 points clear of teammate Nico Rosberg, who finished second from pole. Daniel Ricciardo finished third.

The result leaves Hamilton needing 26 points from the final two races to secure his second World Championship. Mercedes extended their already unassailable lead to 243 points in the Constructors' Championship.

Due to the administration of Caterham Sports limited, the owners of the Caterham team, Caterham are expected to miss this race and the next race 2014 Brazilian Grand Prix as a new buyer is found for the team. They were granted special dispensation to miss both races by Bernie Ecclestone.

Having also been given special dispensation to miss some races, Marussia also entered administration. This meant that once again Alexander Rossi misses out on an opportunity to make his début race.

This reduces the field to just 18 runners, the lowest total since the 2005 Monaco Grand Prix, when BAR were banned in what was originally a field of 20 cars. As a results, qualifying regulations have been amended. Only four cars will be eliminated from each of the first two qualifying sessions instead of six, leaving 14 cars for Q2 and 10 for Q3.

With 100 points available in the Drivers' Championship, three drivers remain in contention: Lewis Hamilton (291 points), Nico Rosberg (274 points, 17 behind) and Daniel Ricciardo (199 points, 92 behind). While neither Mercedes driver can be eliminated, Ricciardo must score at least 17 more points than Hamilton. The Constructors' Championship was sealed by Mercedes at the previous race.

The weekend began in odd circumstances as Daniil Kvyat's garage was incorrectly labelled with a Dutch flag instead of that of his native Russia. The error was rectified shortly before Free Practice 1.