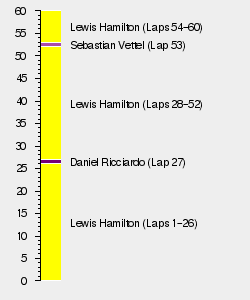 Lewis Hamilton took pole position, seven thousandths ahead of Nico Rosberg. Rosberg's car suffered from electronic and gearbox problems, and after spending 15 laps stuck at the back of the field, retired after failing to restart following a pitstop.

This allowed Hamilton a clear shot at victory, but his strategy was thrown off when Sergio Pérez's front wing fell off and was shredded underneath his car, requiring a long safety car period. With rivals Sebastian Vettel, Daniel Ricciardo and Fernando Alonso not stopping, Hamilton needed to build a gap before his required switch to the prime tyres. Vettel lead a lap before Hamilton overtook him for victory, and a lead in the Drivers' Championship.

Due to the safety car, only 60 laps were competed before the two hour mark, instead of the scheduled 61.