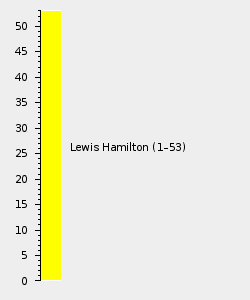 Both the Mercedes cars made a strong getaway, however Hamilton maintained the lead.[1] Rosberg immediately tucked into the slipstream of his teammate before making a lunge into turn 2.[1] Rosberg locked his brakes before abandoning and cutting the corner.[1]

He exited the corner in the lead, however he had taken a massive advantage in moving off the circuit.[1] Behind him, a number of cars had followed his pathway in cutting the corner.[1] Rosberg was immediately instructed to give the place back to Hamilton, however Rosberg simply replied that he had to box because of the "vibrations".[1] Brundle commenting, "Nico Rosberg's championship has just taken another punch."[1]

Upon pitting, Rosberg's engineer alerted him to being on prime tyres and having to catch up the rest of the field and finish the race on the same compound. [1]

On lap 12, Chilton was confirmed to have retired from the race.[1]

Upon Alonso's pit-stop on lap 26, the front left tyre struggled to be attached.[1] Ted Kravitz commenting "What a messy stop for Fernando Alonso that was. That's not going to help them and they're losing their battle in the Constructors' Championship with Williams."[1]

In the midfield, Grosjean made a dive down the inside of Sutil at turn 2.[1] The Sauber refused to give way and Grosjean collided with Sutil's right rear to which he spun the Sauber around.[1] Brundle commenting, "A bit clumsy all round but I don't see that Grosjean needs to be penalised for that."[1]

On lap 31, with Vettel entering the pits, Rosberg had stormed back up into third position.[1] Approaching turn 2, Rosberg stormed up the inside of Bottas to take second place.[1] The Williams tried to defend, however he was late on the brakes and cut the corner.[1] Bottas conceded the position after making a very similar mistake to Rosberg's own troubles at the start of the race.[1]

Rosberg was described as being "unleashed" by Croft to which the Mercedes driver would then go on to set the fastest lap of the race.[1] Having been alerted this by his engineer, Rosberg confidently responded, "The tyres still feel really good."[1] Vitaly Petrov standing and watching in awe alongside Toto Wolff in the Mercedes garage.[1]

However with Rosberg botching his start to the race, Hamilton therefore dominated the race to which he took an easy victory having led every lap of the race.[1]

Retrieved from "https://f1.fandom.com/wiki/2014_Russian_Grand_Prix?oldid=80747"
Community content is available under CC-BY-SA unless otherwise noted.