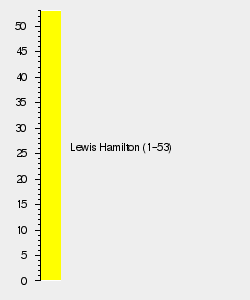 Mercedes clinched their frist Constructors' Championship as a result of the race.

Because of some political issues between Russia and the Ukraine, the 2014 Russian Grand Prix was considered for cancellation. However, it was announced part way through the season that this would not happen and that the Russian Grand Prix would take place despite this conflict. Charlie Whiting visited the facility in mid-August and gave the circuit the green light to hold the race.

Jules Bianchi, having suffered a horrendous accident at the previous race, will be medically unable to take part in the race. Alexander Rossi was entered as Marussia's second driver, but he did not drive out of respect to Bianchi.

Sergey Sirotkin is to be given his first taste of F1 with an appearance in FP1. Roberto Merhi also got a drive in the Caterham.

Mercedes, having extended their championship advantage over Red Bull to 190 points with just 215 remaining, could clinch the Constructors' Championship as long as Red Bull score less than 19 more than Mercedes (post-race, there would be 172 points remaining; simply equaling this total would give Mercedes title victory on wins tiebreaker).

The full entry list for the 2014 Russian Grand Prix is outlined below:

The full qualifying results for the 2014 Russian Grand Prix are outlined below:

Both the Mercedes cars made a strong getaway, however Hamilton maintained the lead.[1] Rosberg immediately tucked into the slipstream of his teammate before making a lunge into turn 2.[1] Rosberg locked his brakes before abandoning and cutting the corner.[1]

He exited the corner in the lead, however he had taken a massive advantage in moving off the circuit.[1] Behind him, a number of cars had followed his pathway in cutting the corner.[1] Rosberg was immediately instructed to give the place back to Hamilton, however Rosberg simply replied that he had to box because of the "vibrations".[1] Brundle commenting, "Nico Rosberg's championship has just taken another punch."[1]

Upon pitting, Rosberg's engineer alerted him to being on prime tyres and having to catch up the rest of the field and finish the race on the same compound. [1]

On lap 12, Chilton was confirmed to have retired from the race.[1]

Upon Alonso's pit-stop on lap 26, the front left tyre struggled to be attached.[1] Ted Kravitz commenting "What a messy stop for Fernando Alonso that was. That's not going to help them and they're losing their battle in the Constructors' Championship with Williams."[1]

In the midfield, Grosjean made a dive down the inside of Sutil at turn 2.[1] The Sauber refused to give way and Grosjean collided with Sutil's right rear to which he spun the Sauber around.[1] Brundle commenting, "A bit clumsy all round but I don't see that Grosjean needs to be penalised for that."[1]

On lap 31, with Vettel entering the pits, Rosberg had stormed back up into third position.[1] Approaching turn 2, Rosberg stormed up the inside of Bottas to take second place.[1] The Williams tried to defend, however he was late on the brakes and cut the corner.[1] Bottas conceded the position after making a very similar mistake to Rosberg's own troubles at the start of the race.[1]

Rosberg was described as being "unleashed" by Croft to which the Mercedes driver would then go on to set the fastest lap of the race.[1] Having been alerted this by his engineer, Rosberg confidently responded, "The tyres still feel really good."[1] Vitaly Petrov standing and watching in awe alongside Toto Wolff in the Mercedes garage.[1]

However, with Rosberg botching his start to the race, Hamilton therefore dominated the race to which he took an easy victory having led every lap of the race.[1]

The full results for the 2014 Russian Grand Prix are outlined below: