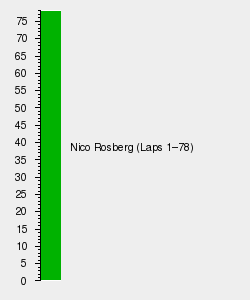 Polesitter Nico Rosberg won the race, with Lewis Hamilton finishing second, hindered by getting something in his left eye. Daniel Ricciardo closed up on Hamilton, but was unable to pass. Fernando Alonso finished fourth after a lonely race. Many drivers retired, and Jules Bianchi crossed the line in eighth place, pushed down to ninth after a five-second penalty, meaning he scored his and Marussia's first points. Kimi Räikkönen, who was involved in a few incidents in the race, took the fastest lap.