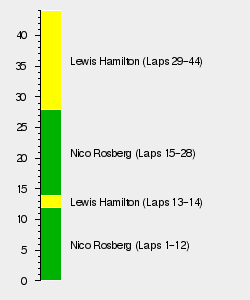 Nico Rosberg took pole position, but in a race affected by the rain of Typhoon Phanfone, Lewis Hamilton won. The race experienced two red flags, initially for the extreme wet conditions, but later a race-ending red flag after Jules Bianchi was seriously injured in a crash.[2] Nine months later, on 17 July 2015, Bianchi died of his injuries at Centre Hospitalier Universitaire (CHU) in Nice.[3] He was the first driver to be killed as a result of a race accident since Ayrton Senna at the 1994 San Marino Grand Prix.

In the days leading up to the first practice session, a volcano on Mount Ontake erupted, killing 47 people. Despite this disaster, it was concluded that the race would go on as scheduled.

Max Verstappen was given his Free Practice début for Toro Rosso, replacing Jean-Éric Vergne, becoming the youngest driver to take part in a Grand Prix event, only celebrating his 17th birthday on the previous weekend. Roberto Merhi took over Kamui Kobayashi's Caterham for FP1. Will Stevens was to drive in FP1 for Marussia, replacing Max Chilton, but the paperwork did not go through, so he was unable to take part.

On the championship fronts, Lewis Hamilton's victory at the previous race gave the Brit a three-point lead over Nico Rosberg, for whom fresh electrical parts would be required after his wiring loom failure. Mercedes lead the championship by a large margin that would take Red Bull until the final race to recover. If Mercedes score a one-two with Red Bull failing to score any points, Mercedes would win the Constructors' title.

Typhoon Phanphone was predicted to hit Japan on Sunday, meaning the race was expected to be wet, but all the sessions were to be unaffected by the typhoon. While a lot of rain was expected for the race, the worst of the storm was to arrive on Monday, meaning teams were likely to have issues travelling to the Russian Grand Prix.

Jules Bianchi, still unconscious, was driven to Mie General Hospital, as the weather conditions meant using the medical helicopter was not possible. Bianchi underwent a CT scan, which showed a severe head injury, and was immediately operated on. Later that night, he was moved to intensive care and was reported as breathing unaided, though the latter report was soon reported as false.

Unsurprisingly, celebrations were muted and every driver and team personnel paid their respects to Bianchi and all hoped that his condition would improve as fast as possible.

Lewis Hamilton stated after the race that Adrian Sutil's accident did not require the safety car; and also stated that the conditions, while bad, were not the worst he had driven. Felipe Massa claimed that he had been "screaming" about the severity of the weather for five laps before the race was stopped.

The red flag on lap 46 mean that results were counted back to lap 44, and full points would be awarded. This moved Sebastian Vettel up to third, saw Nico Hülkenberg be classified eighth and meant that both Bianchi and Sutil were credited with classified finishes.

In terms of the Championship standings, Hamilton extended his lead over teammate Nico Rosberg to ten points, while further down Fernando Alonso's retirement combined with Vettel's podium meant that German moved up to fourth in the championship. Mercedes extended their lead over Red Bull to 190 points.

Sadly, nine months after the race, on 17 July 2015, Jules Bianchi died of head injuries as a result of his accident at the age of 25 in Centre Hospitalier Universitaire in his hometown in Nice, France.[3] He had been in an induced coma since the accident, in which he suffered a diffuse axonal injury. He became the first Formula One driver in 21 years to die as a result of injuries sustained during a Grand Prix session. The last was that of three-times World Champion Ayrton Senna on 1 May 1994, during the 1994 San Marino Grand Prix.[4] Bianchi's grand-uncle Lucien Bianchi had also died in an accident 46 years prior, during Le Mans testing.