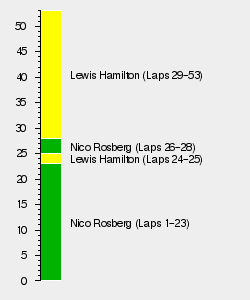 Lewis Hamilton started the race on pole position. Despite some technical issues at the start of the race, Hamilton was able to win the race.

The Italian Grand Prix took place at the fastest track on the 2014 season calendar. In the weeks leading up to the event, designers made some minor modifications to the circuit, removing most of the track's gravel traps. These modifications were geared towards the arrival of MotoGP.

In the previous race in Belgium, Mercedes drivers Lewis Hamilton and Nico Rosberg were involved in an incident. Rosberg and Hamilton made contact on the second lap of the race, causing damage to Rosberg's front wing and puncturing Hamilton's left-rear tyre. Rosberg was given blame for the accident and was internally disciplined by the team. In addition, Rosberg was also handed a €200 000 fine.

As the race began, pole sitter Hamilton had misjudged the timing of the lights going out.[1] Brundle commenting, "He moved slightly before the lights changed as well, very slightly. And I think that may have meant he hesitated and he got the start horribly wrong."[1]

This meant that heading into the Variante del Rettifilo, Rosberg had taken a clear lead whilst Hamilton had dropped down to fourth behind Button and Massa.[1]

On the sixth lap, Chilton had retired at the Variante della Roggia.[1] Croft noting, "The man who makes a habit of finishing races is out of the race in Formula One for the second time."[1] Brundle described his accident as being "too hot on the way in" to which the Marussia driver ran too deep bouncing off the outside kerb and then flew into the opposing barriers at the exit of the corner.[1]

On the tenth lap, Hamilton had caught and passed Massa's Williams for second.[1] The Mercedes driver had attacked around the outside of the Variante del Rettifilo to which he had passed the Williams in the second part of the chicane.[1] Hamilton thereafter began to put in some blistering lap times in a bid to close in on Rosberg's lead.[1]

As Hamilton closed in, Rosberg began to feel the pressure from his teammates speed.[1] His lead was reduced a further five seconds when he outbraked himself into the Variante del Retiffilo and had to take the escape road to rejoin the circuit.[1]

Hamilton continued to close in to Rosberg's lead to which on the twenty ninth lap after setting a new fastest lap of the race was on the tail of his teammate.[1] With Hamilton now on his tail, Rosberg for the second time in the race outbraked himself into the Variante del Rettifilo.[1] Rosberg's second mistake at the corner had meant he had lost the lead of the race to Hamilton.[1] As the Mercedes boss, Toto Wolff watched his cars battle, David Croft noted "There is almost a smile across Toto Wolff's face."[1]

Hamilton after a storming drive had retaken the lead of the race to which Brundle noted "Why is he back out in front? Because he put his teammate under pressure. The racers instinct came through and won."[1]

Shortly after the Mercedes cars had their antics at the Variante del Rettifilo, Alonso's Ferrari had arrived at the corner.[1] However the Ferrari had ground to a halt to which Alonso pulled out of the race right ahead of a grandstand filled with his team's beloved Tifosi.[1] With Alonso's retirement from the race, Brundle commented, "The first time he has not been on the podium here for Ferrari."[1]

On the forty-seventh lap, the Red Bull's were battling to which Ricciardo sliced his way past Vettel through the inside of the Variante della Roggia.[1] Croft noting, "He forced Sebastian Vettel to the wide outside and then Ricciardo slipped to the inside."[1]

At the conclusion of the race, it would be Hamilton leading Rosberg by three seconds to whom would lead another dominant one-two for the Mercedes team.[1]