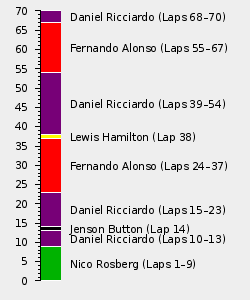 Four types of tyres were brought by Pirelli to the race, being the medium "primes", soft "options", intermediate and full wet types.[2][3] The circuit had two DRS zones: one on the start/finish straight between turns 14 and 1, and the other between turns 1 and 2.[2]

Fourth place in the championship was Fernando Alonso with 97 points, followed by Valtteri Bottas with 91 points.[2] The top five positions were founded out by Ferrari with 116 points, and Force India with 98.[2] The only race to not be won by a Mercedes driver before the Hungarian Grand Prix was Ricciardo in Canada.[2][4] Additionally, second place finishes were each gained by Kevin Magnussen and Bottas, and third place finishes were achieved by Vettel, Alonso, Jenson Button and Sergio Pérez.[2]

For the race, the chassis of Marussia's MR03 was changed for Max Chilton after he received balance and electrical issues in Austria.[5] A small wing section was introduced by Williams in hopes to gain more downforce and grip, made by the bodywork.[6] New front wing endplates were brought by Lotus, being made to scavenge the airflow more efficiently.[7]

The first practice session took place on July 25, and lasted for 90 minutes.[8]

The fastest driver on the track was Hamilton, followed by Rosberg and Kimi Räikkönen. Following his installation lap, Chilton drove back to the pits when smoke and fire poured from the rear of his car due to an oil leak, forcing his gearbox to be changed before the end of the session.[9] He was only able to complete five timed laps, finishing 21st in front of Jules Bianchi.[10] Adrian Sutil, Kamui Kobayashi and Marcus Ericsson also spun while on the track, but were all able to continue.[9] Romain Grosjean also had to finish about ten minutes before the end of the session due to an issue found on his car.[11]

The second practice session also took place on July 25, and lasted for 90 minutes.[8]

Although Hamilton was struggling with tyre grip, he was able to set the fastest time in the session, followed by Rosberg, Vettel and Alonso.[12] Magnussen out-braked himself and went across the gravel at Turn 6 during the start of the session, but was able to rejoin. Kobayashi also spun at the chicane, but was still able to continue. Ericsson went wide at Turn 11, but again rejoined. Felipe Massa had a big spin at the chicane, with his rear wing only just snapping out. He then rejoined before coming back to the pits.[11] He missed out on much of the session due to a car problem, which it was suggested by engineering boss Rob Smedley that the problem occurred in Massa's left rear tyre. Pastor Maldonado fell into the list of drivers who spun, but managed to continue, while Grosjean could not do much laps due to the Lotus team fixing his cooling system leak.[13]

The third practice session took place on July 26, and lasted for an hour.[8]

However, while driving on the circuit, he went wide at Turn 1, and later tried to get his car turned into the final turn.[14]

Pastor Maldonado was forced to stop his car on track when its energy storage received a malfunction, and had to start 20th on the grid.[15] Others eliminated were Kamui Kobayashi and Marcus Ericsson.[14]

Q2 lasted for 15 minutes. Any driver who qualified 11th or lower was eliminated at the end.[8]

He was eliminated at the end of Q2, followed by Adrian Sutil, Sergio Pérez, Esteban Gutiérrez, Romain Grosjean and Jules Bianchi.[14]

The third and final part of qualifying ran for 12 minutes, and chose the positions of the top ten drivers.[8]

Caught by the conditions, Rosberg went wide at Turn 1. Q3 was soon red-flagged when Kevin Magnussen hit the barriers at the same curve after his tyres locked up.[14] A new chassis and gearbox change meant that he had to start from the pit lane.[16] Jenson Button also went wide at Turn 1, but was able to make the corner this time. However, Fernando Alonso got caught out. By the time the session restarted, the rain had stopped.[14] Rosberg set pole position, with a time of 1:22.715. Vettel joined him on the front row.[17]

The track was wet, and the area was hit by thunderstorms throughout the day. While the track temperature ranged between 27 to 28°C, the air temperature was between 20 to 21°C.[20]

As Rosberg streaked into the lead, Bottas took second from Vettel on the outside of Turn 1, and Alonso shortly overtook Vettel after the same curve, but Vettel managed to get past Alonso after Turn 5.[21] Brundle commenting, "smart thinking there from Bottas. Stayed out of the spray of the leading two and went down the outside and found the extra grip".[21]

Due to his brakes being cold, Hamilton spun on Turn 2, with the barriers lightly scraping his car's front left, and his front wing was a little bit damaged.[22] However, he was able to continue, but in last place.[22]

On lap eight, Ericsson lost control of his Caterham, and crashed at Turn 3.[21] The safety car was then deployed, to which the top four of Rosberg, Bottas, Ricciardo and Alonso.[21]

Whilst the safety car remained on the track, Grosjean's Lotus was still finding the conditions too treacherous and, like Ericsson, crashed his car at turn 3.[21]

The race was later resumed on lap 14. Jenson Button quickly passed Daniel Ricciardo to take the lead.[21] Croft noting, "He had more grip coming out of the corner on the intermediate tyres than Ricciardo had on his slicks."[21]

He came back out in 16th place, meaning that the decision by McLaren to give him intermediate tyres at his first stop had cost him greatly.[22]

Five laps after his initial incident with Hülkenberg, Pérez then lost control of his car whilst exiting the final corner. Croft described the incident as "careering across the track and slamming into the pit wall."[21] Following this incident, the safety car was once again deployed again.[21] Brundle commenting, "A lot of debris."

On the thirty third lap, Vettel had nearly identical spin to Pérez whilst exiting the final corner.[21] He lost control of his Red Bull whilst running over the kerbs, however unlike Pérez, Vettel managed to complete a 360 spin to which he kept the car out of the barriers by the slenderest of margins.[21]

A lap later, Hamilton came into the pits, coming back out behind Alonso along with jumping Rosberg. Ricciardo was then back in the lead.[22]

Rosberg had been able to make further progress, as Hamilton was almost a second ahead of him with no cars between them.[22] However, Hamilton ignored the order, as he replied on the radio: "I'm not slowing down for Nico. If he gets close enough to overtake, he can overtake me."[23] He knew that at this point, he would be racing Rosberg effectively, and did not want to get far behind the leaders by letting him pass, as being over a second ahead of him.[24] Alonso out-braked himself and cut the chicane on lap 63, but kept the lead and was not given any penalty.[22]

Ricciardo carrying immense speed then attacked Alonso on the following lap.[21] The Red Bull attacked down the inside into the first corner to which Croft noted "Alonso tries to fight but he just hasn't got the traction."[21]

Rosberg tried to get past Hamilton on the outside at Turn 2, but Hamilton squeezed Rosberg off the track, keeping third place.[21] Daniel Ricciardo won the race with 5.2 seconds behind to Fernando Alonso. Hamilton and Rosberg finished third and fourth respectively.[22]

Following the race, it was said by Mercedes' non-executive chairman Niki Lauda that he made an agreement on Hamilton deciding to ignore team orders, explaining that the team had panicked on giving the orders.[25] Mercedes also discovered, while analysing Hamilton's engine, that it lost power after his second pit stop on lap 40. This had cost him about 0.5 seconds each lap in the rest of the race, meaning that he would have won if the problem did not occur.[26]

Retrieved from "https://f1.fandom.com/wiki/2014_Hungarian_Grand_Prix?oldid=80749"
Community content is available under CC-BY-SA unless otherwise noted.