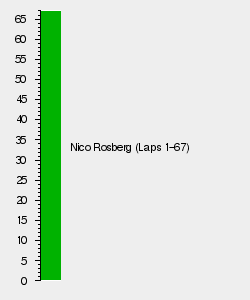 Nico Rosberg took pole position and won the race. Lewis Hamilton, who started 20th after both a crash in qualifying and a grid penalty, finished third; Valtteri Bottas separated the two drivers.

In the German Grand Prix, all drivers ran cars without the FRIC system. FRIC, the front-to-rear interconnected suspension, is essentially an electronic self-levelling suspension system that gives the car better cornering abilities. This system has been used in Formula One for the past ten years. All teams abandoned the FRIC system because of the threat of being protested against if they ran the system.

Going into the race, the Mercedes duo are locked in a tight battle for lead in the World Drivers' Championship. This being the home Grand Prix for the team, both drivers will be looking to finish in a high result. Rosberg leads the World Drivers' Championship by just four points to Lewis Hamilton, but after a victory in his home Grand Prix Hamilton is thought to have the momentum.

Nico Rosberg and Lewis Hamilton of Mercedes proved yet again that they are two of the best drivers of the 2014 season by posting the top two fastest times in the session. The World Drivers' Championship leader Rosberg led Hamilton, but only by 0.065 seconds.

Sebastian Vettel of Red Bull set the fastest time early on after entering the track with the first group of drivers, however this was a position that he was unable to maintain. He had dropped to a respectable sixth position by the end of the session. Teammate Daniel Ricciardo finished in a fourth position, but still had a sizable gap to Fernando Alonso.

Sauber test driver Giedo van der Garde stood in for Esteban Gutiérrez and managed to place the car into 16th position after driving a 23 laps. Susie Wolff made another appearance for Williams, driving Valtteri Bottas' car. This experience proved to be better after suffering mechanical issues in first free practice session of the 2014 British Grand Prix. Early in the session it looked as though Wolff would not get the chance to participate in the session because of more mechanical issues, but the team was able to fix the issue and get her out onto the track for her 22 laps of practice.

Marcus Ericsson made the early start to the session and managed to complete the most laps of the session with a successful 35 laps. However, this would not help his session as he would still finish 21st. Max Chilton finished in the last position after having to return to the garage on his installation lap when he car began to emit smoke. Chilton did manage to complete 22 laps after the issues was repaired, but was off of the pace.

Much like the first practice session, both Mercedes drivers finished with very close lap times. The big difference this session was that Hamilton was on top, with a gap of 0.024 seconds over Rosberg. Rosberg set the pace early on, running the soft tyres. It would remain this way until Rosberg, Hamilton and Ricciardo pitted to change to the super soft tyres. This allowed Ricciardo to set the fastest lap, but Rosberg quickly resumed his spot on top. A few laps later, Hamilton would take the lead by a very small gap. Hamilton would remain on top for the remainder of the session.

Ericsson again suffered mechanical issues with his Caterham early in the session and was forced to stop, but rejoined the session after the car was repaired. Kamui Kobayashi in the other Caterham also had some issues when he car caught fire after twelve laps and he was forced to retire from the session.

Bottas and Gutiérrez took there seats back from the test drivers. Gutiérrez was not able to finish better than his test driver did in the first session, but Bottas was successful in beating Wolff's impressive performance by a staggering five positions.