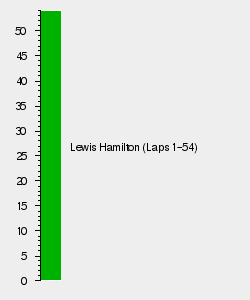 Nico Rosberg and his Mercedes team lead the Drivers' and Constructors' Championships going into the Chinese Grand Prix. Rosberg's lead over Lewis Hamilton is 11 points, while Mercedes have more than twice the points of their nearest rivals, Force India - a lead of 67 points.

Pastor Maldonado will take a five-place grid drop for this race as a result of an avoidable accident in Bahrain in which Esteban Gutiérrez' car was sent somersaulting across the track. The incident also earned the Lotus driver three penalty points on his Super License.

Track conditions were cold for the second free practice session in Shanghi. The tempurature remained in the 23°C range causing many teams to experience tyre graining late in the session.

While entering pit lane, Lotus' Pastor Maldonado crashed into the wall in the pit entrance.

Caterham's Kamui Kobayashi had some trouble when the team detected an issue with the car. He was forced to return to the pits, but later returned to the track.

Lewis Hamilton for Mercedes managed to post the fastest lap for the session, but claims that there was something not right with his car.

*Note: Race initially scheduled for 56 laps. However, the chequered flag was mistakenly shown to Lewis Hamilton at the end of the 55th lap. Results were therefore taken as of the end of Lap 54, in line with Article 43.2 of the FIA Sporting Regulations:

“Should for any reason the end-of-race signal be given before the leading car completes the scheduled number of laps, or the prescribed time has been completed, the race will be deemed to have finished when the leading car last crossed the line before the signal was given.”