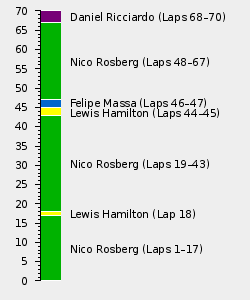 Daniel Ricciardo took his first ever race victory after overtaking Rosberg in the last few laps. This made him the first non-Mercedes driver to win in 2014, and the fourth Australian to win a Grand Prix, after Jack Brabham, Alan Jones and Mark Webber.

The race starts in lovely sunny weather. Nico Rosberg, the pole sitter is warned that his brakes are too cold as he is sitting on the grid waiting for the drivers behind him to claim their positions on the grid. Rosberg and his teammate Lewis Hamilton are side-by-side off of the start as they head into the first corner, but Rosberg squeezes Hamilton off of the track on the entrance to the second turn. Hamilton is forced into the grass, allowing Red Bull's Sebastian Vettel to gain P2 and split up the two Mercedes cars.

Disaster in turn four as Max Chilton and teammate Jules Bianchi get together on the first lap. The rear of Chilton's car appeared to slip away from him going into the corner, making Bianchi the innocent victim. Both cars were retired from the race and the safety car was called out onto the track to clean the debris and fluids from Bianchi's car. The accident was reviewed by the race stewards at the end of the race and it was determined that Chilton would receive a three-place grid penalty for the next grand prix in Austria.

The race is then resumed on lap nine, Hamilton hanging back from the two cars in front of him. Marcus Ericsson of Caterham retired from the race, suffering from a turbo failure. On lap 10, Hamilton chases down Vettel and breezes past him while using the DRS. Romain Grosjean is the first to pit and swap for the soft tyres on the 12th lap of the grand prix. A close call for the leading Mercedes of Rosberg, as he fishtails the car in turn four and almost impacts the wall on the 19th lap, but luckily he saves the car.

Hamilton pits in on the 20th lap and returns the lead back to his teammate. Pastor Maldonado then retires from the race with a power unit failure. A big battle in the hairpin between Nico Hülkenberg and Vettel, as Vettel goes wide after attempting a pass on the inside. Kamui Kobayashi then nurses his car back to the pits after spinning his car in the first turn. He retires with suspension damage.

Hamilton was closing the gap on Rosberg, but Rosberg locks up in the final corner and cuts the chicane. The gap opens back up and Rosberg is placed under review, but no penalty would be called. Rosberg is forced to lower his fuel consumption, as he has used more fuel than his teammate and would be unable to complete the race at his current pace. Sergio Pérez pits in for his first time in the race after spending a stunning 34 laps on the super-soft tyres.

Drama for the Mercedes team, as both drivers report power loss in the 35 lap of the race. Hamilton still able to close the gap on his teammate, but both cars were lapping approximately two seconds slower than the cars behind. Nico Hülkenberg takes second position and is 20 seconds behind both Mercedes cars. Kimi Räikkönen takes a spin in the chicane, but recovers the car to continue the race. Rosberg pits for new tyres, followed by Hamilton the next lap.

Now racing close on the 46th lap, Hamilton goes for the lead in the hairpin but shoots wide as the two Mercedes make contact. Heading into the final corner, Hamilton cuts the corner and returns the position back to Rosberg. Smoke formed on from the rear tyre of Hamilton's car and he reports a brake failure and retires from the race.

Rosberg, still suffering from some sort of power loss is lapping one second slower per lap than the second place driver Pérez. The Williams, Felipe Massa is trying to make a pass on his teammate, but Valtteri Bottas gets to use the DRS as he chases down Hülkenberg. Massa stils makes the pass on both Bottas and Hülkenberg. Seven laps later, Massa tries to make the pass on Vettel, but can't get it done after his DRS does not open.

Rosberg gains some gap between himself and the second place driver because Pérez reports that he is suffering from a brake issue. Daniel Ricciardo moves into second, easily passing the slower Force India. Ricciardo then closes the gap enough to make the pass for the lead with only two laps to go.

Going into the first turn of the final lap, Massa pulls out from behind Pérez to make the pass. Pérez brakes earlier in the corner and there is contact between the two. Pérez's car is shot into wall and Massa is sent through the grass and in front of Vettel, almost making contact. Massa and Pérez make big impact with the wall and the safety car is brought out, meaning the race would finish in that order and giving Ricciardo his first Formula One victory. Both Massa and Pérez are taken to the medical center, but are released later without injuries. It was later determined that Pérez was the cause of the accident and he was given a five-place grid penalty for the following race.

Retrieved from "https://f1.fandom.com/wiki/2014_Canadian_Grand_Prix?oldid=62442"
Community content is available under CC-BY-SA unless otherwise noted.