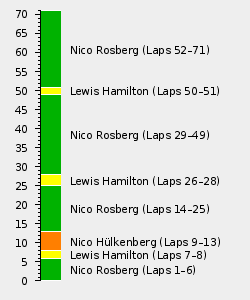 Rosberg, however whom had never finished on the podium in Interlagos before would go on to take the race victory.[1] Croft describing it as "important" for Rosberg in order to keep his title challenge alive. Mercedes would score a 1-2 with Rosberg leading Hamilton.[1] However the efforts of Massa and Button to finish third and fourth had meant that Mercedes engines had locked out the top four places.[1]

Retrieved from "https://f1.fandom.com/wiki/2014_Brazilian_Grand_Prix?oldid=80746"
Community content is available under CC-BY-SA unless otherwise noted.