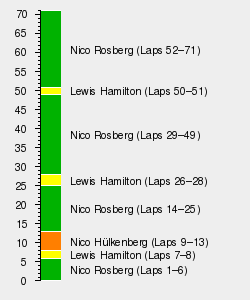 The 2014 Brazilian Grand Prix (officially the Formula 1 Grande Prêmio do Brasil 2014) was the eighteenth round of the 2014 Formula One Season. It was held between November 7 and November 9, 2014.

A few weeks before the race, Pirelli altered their tyre allocation from the Medium and Hard compounds to the Soft and Medium compounds after the initial choice was criticised as being too conservative.

Both Caterham and Marussia are expected to miss this race, for both the second race in succession.

After securing his eighth Pole Position of the season in Austin, Nico Rosberg will claim the 2014 Pole Position Trophy if anyone but Lewis Hamilton claims pole at this event.

The Drivers' World Championship cannot be won at this race, as Hamilton leads Rosberg by 24 points; at best, Hamilton can go into the Abu Dhabi Grand Prix with a 49-point lead, with 50 available for victory at the final race.

Daniil Kvyat will serve a seven-place grid penalty after only incurring three of the ten applied after his engine change at the previous race. Sergio Pérez will also drop seven positions on the grid after his collision with Adrian Sutil.

Rosberg, however whom had never finished on the podium in Interlagos before would go on to take the race victory.[1] Croft describing it as "important" for Rosberg in order to keep his title challenge alive. Mercedes would score a 1–2 with Rosberg leading Hamilton.[1] However the efforts of Massa and Button to finish third and fourth had meant that Mercedes engines had locked out the top four places.[1]