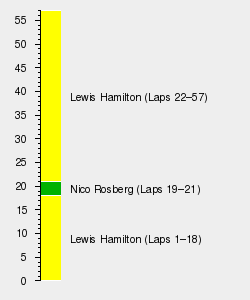 The 2014 Bahrain Grand Prix was the third race of the 2014 Formula One Season. It took place on the Grand Prix layout of the Bahrain International Circuit, the same layout as in 2013. The event marked the 900th Grand Prix to take place as part of the Formula One World Championship which began in 1950.

Following the installation of floodlighting at the Sakhir venue, the event ran as a night-race, the third event (after Singapore and Abu Dhabi) to take place under floodlights.

In early 2014, organisers of the event decided that the first corner of the Bahrain International Circuit would be named in honour of seven-time World Champion, Michael Schumacher who had recently suffered life-threatening injuries in a skiing accident in the French Alps.

Nico Rosberg took pole position for Mercedes, his first pole of the season and the team's third, with Hamilton in second, his qualifying ruined by a first-corner lock-up. Daniel Ricciardo qualified third, but a ten-place grid penalty meant he started 13th, and Valtteri Bottas started third.

Hamilton took the lead at the first corner and lead the race to the end, holding off a series a challenges from his teammate Rosberg. Sergio Pérez impressed to finish third, ahead of a fast Ricciardo.

Lewis Hamilton took the lead from Nico Rosberg before the first corner. Rosberg was attempting to pass Hamilton, but without success as they leave all of the other drivers, creating a large gap.

Adrian Sutil was forced to retire from the race after getting into the side of Jules Bianchi's car on the outside of the turn. Bianchi continued the race after returning to the pits to repair his left-rear puncture. This accident is under investigation.

On lap 40, Pastor Maldonado got into the back of Esteban Gutiérrez, sending Gutiérrez's car into the air. The car overturned and then rolled back over on to its wheels. Gutiérrez escaped, uninjured and Maldonado was given a 10-second stop-and-go penalty, as well as 5 place grid penalty for the 2014 Chinese Grand Prix.

As a result, for the accident, the safety car was deployed. The field was brought back together for 5 laps under yellow. Mercedes drivers Hamilton and Rosberg were told that they could battle for position as long as both cars crossed the finish line. During the caution, Rosberg had pitted for a new set of soft tyres, leaving Hamilton on the hard tyre compound.

The race was resumed and the track returned to racing conditions. Rosberg made moves on Hamilton for the remainder of the race, but the defense was too strong. Hamliton completed the race with a one-second lead, making this his second consecutive win of the season and the second one-two finish for Mercedes.