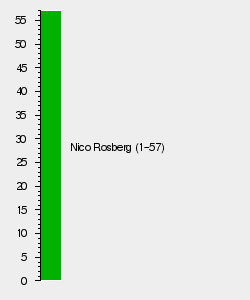 After a close battle in wet conditions during qualifying, Lewis Hamilton started the race on pole. Daniel Ricciardo in his first race for Red Bull will join the Briton on the front row.

At the start, Nico Rosberg took the lead from third on the grid. Hamilton retired from a cylinder issue, while further down the field World Champion Sebastian Vettel retired after five laps with powertrain issues. Rosberg won very comfortably from Ricciardo, who had to fight off debutant Kevin Magnussen for second place, both drivers taking their first podiums.

However, after the race, Ricciardo was disqualified for excessive fuel flow, promoting Magnussen to second and Jenson Button to third. Despite an appeal by Red Bull, Ricciardo's disqualification was upheld.

Drivers Marcus Ericsson, Kamui Kobayashi (Caterham), Pastor Maldonado and Romain Grosjean (Lotus) were also unable to set any times in the session. With 10 minutes remaining in the session, Maldonado was able to leave the garage, but continued to experience issues before returning to the garage.

The session was calm with very few accidents.

Daniel Ricciardo (Red Bull) then took the lead when his team switched to the soft tyres.

Lewis Hamilton managed to take the lead, with a lap time of 1:29.625 which would be the fastest of the session.

A battle took place between Sebastian Vettel (Red Bull) and Esteban Gutierrez (Sauber) on turn 2 of the track when Vettel forced Gutierrez high into the turn.

There were issues for both team Caterham and Lotus as they suffered from mechanical issues. Pastor Maldonado required a change in power unit parts, while Marcus Ericsson was still experiencing battery issues. Kamui Kobayashi required a change of its Renault powertrain after some issue they had earlier in the morning. None of these three drivers were able to set a time in this session.

Romain Grosjean (Lotus) was forced to retire from the session after spinning off the track in turn 6 on his 13th lap. His car struck the wall, damaging his rear suspension.

Saturday Free Practice started with a few drops of rain in the air which, although they didn't last long, gave a few drivers some problems. Most cars went out in the first few minutes, but a number of them were caught out at turns 9, 12 and 13. Among the drivers to find the gravel at turn 9 were Lewis Hamilton, Jenson Button and Kevin Magnussen, all of whom misjudged braking points while pushing for a good time. Elsewhere, Esteban Gutiérrez had gearbox problems which forced an early exit to the session and ultimately a five-place grid penalty as his gearbox would have to be changed. The two Caterhams managed to get some laps on the board for the first time of the weekend but the inexperienced Marcus Ericsson was well off the pace. He also had a couple of off-track excursions, only just keeping it out of the barriers late on. Other drivers who were having problems were Romain Grosjean, who complained of a constantly misfiring engine, and Sebastian Vettel who confounded a miserable winter by ending the practice session with problems accelerating.

While many drivers were having problems, Mercedes were flying, with Rosberg beating the field by almost a second and a half. McLaren, Ferrari and Williams also fared well with Button and Alonso completing the top three. Ricciardo made good use of the healthier Red Bull with the fourth fastest lap of the morning.

In the latter stages of the session, Pastor Maldonado's Lotus stopped out on track but with no long-term issues. The same could not be said for Maldonado's former Williams teammate, Valtteri Bottas, who barely got out of the pits and will take a five-place grid penalty for a gearbox change.

The first qualifying session of the new season started in overcast conditions with the clear threat of rain in the air. As a result, drivers made an early start, queueing at the end of the pits to try to beat the weather and get a dry lap on the cards. The first cars out of the pits were the two Mercedes', followed by the rest of the field. The last of the front-runners to leave pits after this early rush was Sebastian Vettel. Once the World Champion put a lap in, he was a second and a half down, despite pushing so hard as to brush the wall on the exit of turn 10. As the early laps came in, Ricciardo's Red Bull, Massa's Williams and a surprisingly aggressive lap by débutant Magnussen topped the timesheet. The two Mercedes drivers opted to save tyres by going out on the prime compound, hoping the arrival of the rain would slow their opponents. Despite setting times well down the order, Hamilton and Rosberg were safely within the top 16. Elsewhere, Kobayashi was going well on his return to F1, placing his Caterham within the top 16 at the first attempt. Things weren't going so well at Lotus, however: Grosjean set an early time that was six seconds off the pace, while Maldonado was still in the pits as the rain began to fall.

As the Lotus pair rejoined the track, the rain began to fall heavier, causing major problems for Maldonado. Already without a time on the board, the Venezuelan spun off at turn 3 and, while he managed to rejoin the track, it was clear that the conditions were worsening. Maldonado opted to abandon the lap and failed to set a time. Grosjean also failed to make the cut for Q2. The other casualties of Q1 were the two Marussias, Sauber's Gutiérrez (who would also take a five-place grid penalty for changing a gearbox), and Marcus Ericsson. The weather did, however, favour the second Caterham of Kobayashi, who made it through to Q2 in 16th place - the first time the Malaysian team had made the second session since the 2013 Belgian Grand Prix.

Between sessions, the rain had stopped but the track was still wet. All sixteen cars went out early, most on the intermediate tyre, to set an early time in case of more rain. The best of the early running was done by the Mercedes' and Ricciardo, while Vettel struggled. Kobayashi's first effort was 12 seconds off the pace, but the Japanese driver would improve on this later. Midway through, Bottas took too much kerb into turn 1 and spun, but recovered quickly. As the session went on and the track dried, the times began to fall. Rosberg, Ricciardo, and Button, among others, traded blows at the top of the standings but it soon became clear that the best times would be achieved towards the end of the 15 minute session. As cars pitted for fresh tyres in the hope of a late run, Magnussen, Vettel, Pérez and Massa all found themselves in the bottom six, needing to improve to make Q3. Magnussen put in a good lap to improve to fifth and Massa to 8th, but Sergio Pérez found the gravel while pushing hard at turn 3. As Pérez was recovering from the gravel, Kimi Räikkönen was having his own problems at the same corner.

Pushing for improvement when his Q3 place looked in jeopardy, the Finn pushed too hard on a damp track, spun out and hit the wall. The incident brought out the yellow flags causing the drivers behind, including Vettel, to slow down. Vettel then lost time in the chicane as he missed his apex, and ended up missing out on a top-ten finish by six tenths. It was the first time the German had failed to make Q3 since the 2012 Belgian Grand Prix. Jenson Button was also caught out by the yellow flags and was squeezed out in 11th. Räikkönen, Sutil, Kobayashi and Pérez also dropped out at this stage.

Red Bull driver Daniel Ricciardo was on a provisional pole position for the race. The crowd would cheer very loud, but his pole position was taken by Lewis Hamilton by 0.317 seconds.

Kevin Magnussen nearly lost control of his McLaren at Turn 8, when he would slide his car to do a save.

Kevin Magnussen and Sebastian Vettel were called to the stewards for speeding under yellow flags, but were cleared of any wrongdoing.

Fernando Alonso was also called to the stewards for blocking Esteban Gutiérrez in Q1, but he would also escape a penalty.

Pastor Maldonado, who did not set a time in the session, was allowed to start the race by the stewards.

Romain Grosjean's car was wheeled out too early, meaning he had to serve a drive-through penalty. As the cars started the formation lap, Max Chilton was left behind. Then, teammate Jules Bianchi's car failed to start. This initiated an extra formation lap.

In the first turn, Kamui Kobayashi suffered a brake failure and collided with Felipe Massa in the first corner. Neither Kobayashi nor Massa were able to continue in the race. Because it was a brake failure, both drivers were cleared from any penalties.

Pole sitter Lewis Hamilton lost the lead off of the start. He retired to the pits on lap 2 because of an engine issue. Defending world champion, Sebastian Vettel was not far off, as he returned to the pits one lap later with a power unit malfunction.

Valtteri Bottas got his Williams car into the wall, forcing the Safety Car onto the track. Bottas was able to return to the race and later grabbed 5th position.

Nico Rosberg's victory was the fourth win of his career and showed the world that the Mercedes F1 W05 was the quickest car by a good margin. Sebastian Vettel's retirement ended his streak of nine consecutive wins.

Daniel Ricciardo's podium was his first, on his first race for his new team. It was the first time that the Red Bull RB10 had gone the race distance.

Kevin Magnussen's podium, on his début, was equally as impressive as Ricciardo's, and also McLaren's first podium since the final race of 2012. Combined with Jenson Button's fourth place, McLaren lead the championship.

Daniil Kvyat scored a point on his first start, meaning he become only the second teenager to score a point in F1 after Sebastian Vettel. Kvyat was younger than Vettel was by 25 days, so Kvyat is the youngest points scorer in F1 history.

The accident between Kamui Kobayashi and Felipe Massa was found to be caused by Kobayashi's rear brakes failing – meaning the Japanese driver was only about to break with his front wheels. As a result of this, Kobayashi was not penalised for the accident.

Ricciardo was also placed under investigation and eventually disqualified by the stewards for having "exceeded consistently the maximum allowed fuel flow of 100 kg/h". However, due to the system potentially being faulty, Red Bull have appealed the decision.

The stewards find that car #3 was out of compliance with the technical regulations and is therefore excluded from the results of the race.

The stewards decision on Daniel Ricciardo, car no. 3

The appeal, held on 14 April, was rejected, and Ricciardo's disqualification was upheld.