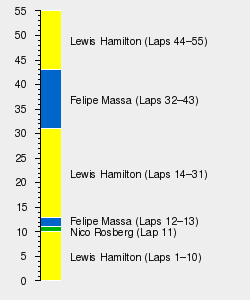 The race saw the culmination of the epic title battle between Mercedes drivers Lewis Hamilton and Nico Rosberg, with Hamilton winning the title by 67 points by finishing first in the race after Rosberg dropped to 14th.

British driver Will Stevens made his début at this race for the Caterham team.

In a move that was considered controversial, the race, serving as the final race of the season, awarded double points to all point scorers – meaning the race winner would score 50 points. Considering the closeness of the title battle between Mercedes drivers Nico Rosberg and Lewis Hamilton, this could dramatically affect the title battle.

Caterham, having been in an administration, had announced that they could attend the race. They had missed the previous two races, and had started up a crowdfunding effort to raise £2.35m (US$3.70m, €2.95m, AU$4.23m), which hadn't reached its target as the announcement was made, though the team proceeded to make 230 staff members redundant to help save more costs. Kamui Kobayashi returned to the team alongside Marussia test driver Will Stevens, who replaced Marcus Ericsson, the Swede leaving the team with immediate effect before Caterham confirmed that they would compete in the race. Rubens Barrichello was reported to have signed a deal to drive in the last three races, but nothing came of it; Alice Powell attempted to raise funds for a free practice drive but failed to obtain the drive; and Caterham's reserve driver Roberto Merhi unluckily missed out. Stevens drove the #46 car, since André Lotterer had previously used the other Caterham spare number of #45.

On the other hand, Marussia had folded during the Brazilian Grand Prix, and despite no longer existing, they still attempted to attend to the race, only failing due to a lack of funds.

Romain Grosjean was confirmed to be continuing to drive for Lotus in 2015 in the days preceding the race.

Jules Bianchi's parents released a statement prior to race stating that Bianchi, in his recovery from his accident at the Japanese Grand Prix, was out of a coma, breathing unaided and had been transferred to a hospital in Nice, France.

Esteban Ocon, winner of the 2014 European Formula 3 Championship, will drive a Lotus in FP1. Hong Kong driver Adderly Fong will drive a Sauber. Both drivers will be making their first appearances in an F1 car.

The Drivers' Championship will be decided at this race, with Lewis Hamilton seventeen points clear of Nico Rosberg:

In FP1, Adderly Fong and Esteban Ocon debuted in an F1 car when they replaced Romain Grosjean and Adrian Sutil respectively. But the main battle happened with Hamilton and Rosberg finishing 1 and 2 in free practice 1.