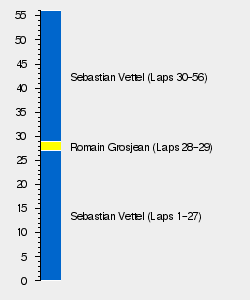 There will be two DRS zones this season, one on the back straight as before, and a new one of the start/finish straight.

Fernando Alonso was cleared to drive at the US GP despite hurting his back after launching over kerbs at the previous race when he overtook Jean-Éric Vergne.

World Champion, Sebastian Vettel, can set an all-time record if he wins here. The German would become the first driver ever to win eight consecutive Formula One Grands Prix.

Kimi Räikkönen misses this race (and the next) after undergoing back surgery. His replacement for the final two races is Heikki Kovalainen.

However, as the start time neared, the track was full of fog; this meant that the FIA medical helicopter, which was stationed at a nearby airport, could not fly. When race control was informed that it was on its way, the practice session was started, albeit 40 minutes late. Kovalainen was the first out, eager to get as many laps under his belt as possible.

However, less than 15 minutes later, the red flag was brought out. The medical helicopter had suffered a radio issue and had to return to the airport. About 35 minutes after the red flag was brought out, the helicopter finally arrived, and the session was resumed. Since the session was required to finish two hours before second practice begins, there was only just over half an hour of time remaining. The teams made hard work of the half hour, with all cars out on track at one point.

In the final five minutes, González stopped out on track with engine failure, bringing out a yellow flag.