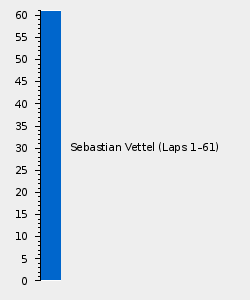 Vettel easily won the race by a large distance ahead of Fernando Alonso. Kimi Räikkönen, who was suffering from back pains, came third.

Sebastian Vettel entered the race as Championship leader, having won the previous two races, while his team, Red Bull-Renault lead the Constructors' Championship.

The notorious Turn 10, a sharp left-right-left chicane known as the "Singapore Sling", has been replaced by a single-apex left-hand bend. This is expected to improve lap times by about one second.

Some of the track has also been resurfaced, including Turns 1 to 3, Turn 5, Turn 8, Esplanade Drive (between Turns 13 and 14) and the pit lane.

Nico Rosberg started sharply from second on the grid and overtook Vettel going into the first corner, however rain wide on the exit meaning the polesitter could retake the lead. Fernando Alonso made yet another fantastic start, moving from seventh to third in the first few corners.

Vettel coasted infront and there was little action amongst the field until lap 25, when future Red Bull driver Daniel Ricciardo crashed going into the tunnel causing the safety car to come out. Vettel however had no problems with the restart 6 laps later.

Shortly after the safety car exited the track, Romain Grosjean was forced into a pitstop because of an air-consumption problem on the engine. He slotted back many seconds later at the back of the grid, ending his probable chance of a podium. The Frenchman reitred three laps later.

On lap 42, Mark Webber jumped Rosberg during the German's pitstop for second place. Rosberg was urged to push and overtake Webber, however the Mercedes driver was surprisingly reluctant, fearing of wearing his tyres out. The other Red Bull pitted on lap 45, and comfortably rejoined in 1st position, ahead of Alonso.

This ended the pitstop phase of the frontrunners, with drivers electing to run to the end on an old set of tyres. A queue of cars were packed up behind Esteban Gutiérrez, however the Mexican was quickly disposed and dropped three spaces over the course of one lap. Hülkenberg was passed by Webber, Rosberg and Hamilton quickly after.

Both McLaren drivers, at the time in 3rd and 5th, lost positions due to their tyres wearing, ending the Woking team's hopes of a first podium of 2013, and to pull further away of Force India in the constructors title. Force India driver Paul di Resta crashed out on lap 56, pushing too hard in getting into the points.

Webber, hunting down Räikkönen in third, was told to short-shift for the second race in a row. Although this seemed innocuous at first, it ultimately turned terminal with the Australian at first losing places, but then having to pull off the track with an engine blow-out and a fiery Red Bull.

Vettel crossed the line over 30 seconds ahead of Alonso, with the two Mercedes drivers crossing the line in fourth and fifth. The McLarens held on to seventh and eighth, Button then Pérez, with Hülkenberg and Sutil rounding off the points.

On the slowing-down lap, Fernando Alonso gave the unlucky Mark Webber a lift back to the pits. Both drivers incurred reprimands, Alonso for abuptly slowing down on track and Webber for walking on it without permission. Webber's reprimand was his third of the season, and thus he received a ten-place grid-penalty for the next race, the Korean Grand Prix.

Retrieved from "https://f1.fandom.com/wiki/2013_Singapore_Grand_Prix?oldid=50859"
Community content is available under CC-BY-SA unless otherwise noted.