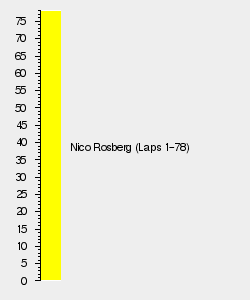 In qualifying, Nico Rosberg took his third consecutive pole position, ahead of teammate Lewis Hamilton. Sebastian Vettel took third, and Giedo van der Garde performed admirably to get into Q2. Massa's car was not repaired in time and he did not take part in qualifying.

The race started without major incident, though Van der Garde and Pastor Maldonado required new front wings. Eventually, Charles Pic had a gearbox seizure, and he was forced to retire. About half-way into the race, Massa had a near-identical collision to the one he suffered in practice, which brought out the safety car. Massa was injured in the accident and was fitted with a neck brace. On lap 46, Max Chilton overshot the Nouvelle Chicane, and was pressured by Maldonado. Chilton did not see Maldonado and they collided. Maldonado crashed heavily into the barrier, and brought out the red flag.

As the race neared its conclusion, Grosjean misjudged his braking for the Nouvelle Chicane and crashed into Daniel Ricciardo, knocking off the Australian's rear wing. Grosjean suffered a broken floor and both drivers were forced to retire, and the safety car was brought out once again.

In the end, Rosberg lead every lap to win in fine style, ahead of Vettel and Mark Webber. Hamilton lost out in the first safety car to the Red Bull drivers.

Since Nico Rosberg's father, Keke Rosberg, won the Monaco GP in 1983, it was 30 years ago since Keke's victory.

The full entry list for the 2013 Monaco Grand Prix is shown below:

* Felipe Massa received a five-place grid penalty for changing his gearbox after a large accident in third practice. However, he qualified in last place and did not lose any places from it.

† Max Chilton also received a gearbox penalty. As his gearbox was changed after Massa's was, Chilton's penalty was applied after the Ferrari driver's penalty. Chilton qualified 20th and lined up 22nd.

Pastor Maldonado crashed and the red flag was waved out