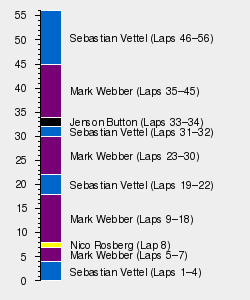 Sebastian Vettel took his second pole of the year, with a time nearly one second quicker than second-fastest Felipe Massa. Championship leader Kimi Räikkönen qualified seventh, but was given a three-place penalty for blocking Nico Rosberg, and started tenth.

Vettel went on to win the race ahead of teammate Mark Webber.[3] Vettel led at the start, defending a strong start from Fernando Alonso, who hit the back of the German at the end of Turn 2. The Ferrari driver's front wing was damaged, but he did not pit, and crashed out after it fell off. Webber lead the middle of the race, but was overtaken by Vettel in the final stint despite team orders to keep his position.[4] Lewis Hamilton secured the final podium position, after Rosberg was told strongly to not overtake his Mercedes teammate.[5][6][7]

Following from Australia, Kimi Räikkönen took the lead in the championship after winning in Australia, Fernando Alonso was 7 points behind while Sebastian Vettel was a further 3 points.

The full entry list for the 2013 Malaysian Grand Prix is shown below:

At first, the track was damp with tricky conditions, mostly around Turn 3. Sebastian Vettel led in the first stage of the race, as Fernando Alonso's front wing gets clipped from hitting the back of Vettel's car. Alonso was able to keep ahead of Mark Webber until the start of lap 2, when his front wing came off and prevented the front tyres from touching the ground, causing the car to go into the gravel at Turn 1.[11] Vettel came into the pits early on lap 6 to put on slick tyres, and fell back behind Sergio Pérez, Adrian Sutil and Romain Grosjean, although he was able to regain them quickly on the track's drier parts. His pit stop put Mark Webber into the lead, and he kept it during the next pit stops, when the Red Bull team told him to stay out due to the slick tyres being too dry at Turn 3.[12]

On lap 7, Sutil had a long pit stop due to a wheel nut failure, which also happened to Force India's other driver Paul di Resta. Both drivers were forced to retire later in the race, which it was believed by the team that the issue was caused by the high temperatures.[13]

Later on lap eight, Lewis Hamilton made a mistake by driving into McLaren's pits while racing for Mercedes, before being waved through by the team to the correct pits.[14][15]

On lap 9, Jean-Éric Vergne and Charles Pic collided in the pits when Vergne was released into the path of Pic.[16] Pastor Maldonado went off the track on lap 13 after touching a damp white line, and damaged his front wing, but was able to continue in the race.[12]

After Webber, Vettel, Hamilton and Rosberg took their pit stops, the race was briefly led by Jenson Button on laps 33 and 34, making it look like McLaren would score good points until he fell a whole lap behind due to a pit stop where one of his tyres was not fitted on properly.[17][18]

Webber took his final pit stop on lap 44, and got back in the lead just ahead of Vettel, who battled with him through the following two laps, especially on the front straight. Afterwards, Vettel overtook Webber to take the lead. Caught by TV cameras, Webber flipped the finger to Vettel on the same lap. Earlier, Vettel was told by Red Bull's team principal Christian Horner on the radio, "This is silly, Seb. Come on."[4] Meanwhile, Hamilton and Rosberg were battling for third. Rosberg asked the team to let him past Hamilton, saying that he is so much faster, only to hear Ross Brawn reply, "Negative Nico, negative." Later, Brawn added that "Lewis' pace is what we're asking him to do. He could go a lot faster as well." However, Rosberg kept close behind his teammate, causing Brawn to tell him, "Nico please drop back, there's nothing to gain - I want to bring both cars home please."[19] Later in the race, Maldonado retired when a KERS malfunction forced him to stop his car for precautionary reasons.[20] Button was later forced to retire on lap 55 after receiving a severe wheel vibration,[17][18] and Daniel Ricciardo had to retire with only 51 laps completed, due to receiving exhaust problems.[21] However, both of them were classified as finishers due to completing over 90% of the distance.

There was a brief exchange from Webber and Vettel before the podium ceremony, which Webber said to Vettel, "Multi-21, Seb. Multi-21," which meant the team issue of having Webber (car no. 2) win in front of Vettel (car no. 1).[22]

Later, Webber stated during the podium questions that "I want to race as well but in the end the team made the decision ... we look after the tyres, get the car to the end. In the end Seb made his own decisions today, not respected team orders, but will have protection as usual and that's the way it goes."[23] It was later confirmed by Horner that Vettel ignored team orders and had "taken things into his own hands."[24]

Upon being asked on his third-place finish, Hamilton stated that Rosberg deserved it more as stating that "If I'm honest I really feel that Nico should be standing here."[5]