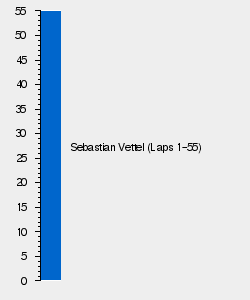 After three consecutive victories, Sebastian Vettel takes a lead of 60 points over Fernando Alonso to Korea. His team, Red Bull-Renault, have a lead of 103 points over Alonso's team, Ferrari.

As a result of obtaining his third reprimand of the season at the previous race, Mark Webber will be penalized ten places on the grid.

Some changes to the circuit had been implemented since the last race. The pit lane exit was the most noticeable change. Previously, it joined the track at Turn 1, but now rejoins the track at Turn 2 where is it much safer. Other changes included replaced artificial grass and new kerbs to prevent cars from cutting corners.

Although Sebastian Vettel led every lap on his way to victory, it was not as dominant as previous races. The drivers got off cleanly up until turn 4, when Felipe Massa spun under braking, almost taking out teammate Alonso in the process. This caused many drivers to take avoiding action, including Esteban Gutiérrez, who dropped from 6th to 14th.

Graining on the right-front tyre was an issue for most drivers, which led to many complaints from drivers and messages of caution from their engineers. Hülkenberg was able to fend of Alonso for 5th place, with the Ferrari driver constantly under pressure from future teammate Kimi Räikkönen.

Paul di Resta was the first retirement of the race on lap 26, with the Force India driver hit the kerb at turn 12 before spinning around and tapping the barrier. Two laps later Rosberg attempted a simple DRS overtake on teammate Lewis Hamilton, but his nose cone dropped off unusually during the pass, causing sparks to fly from the front of the car. This meant Mercedes had to pit the German over Hamilton, who was struggling with grip.

Sergio Pérez caused the first of two safety cars in quick succession, with the Mexican's front-right tyre delaminating on the main straight following a heavy lock-up into turn 1. This caused Mark Webber to take avoiding action but still managed to pick up a puncture, frustrating the driver since he had just exited the pits.

Vettel made another rapid restart ahead of Romain Grosjean. Hülkenberg was able to pass Hamilton on the main straight on lap 37 to take the Sauber driver into p4. Just behind, Adrian Sutil spun under braking, similar to Massa earlier in the race and t-boned Mark Webber. This subsequently set Mark Webber's car alight, for the second consecutive race, with the Aussie fortunately okay. As the safety car had not yet been deployed, Kimi Räikkönen was able to pass his teammate on the pit straight, following an error by Grosjean exiting the final few corners. Grosjean may have been able to attack Kimi on the DRS straight, but was denied by the presence of the fire Jeep on the straight, before the safety car had been deployed.

Räikkönen was able to make a better restart than Grosjean did several laps before, but could not attack Vettel. The remaining fifteen laps saw tight battle for fourth and tenth position, in particular skirmishes between Hülkenberg and Hamilton, and Hamilton and Alonso. There was a five-car battle for the final points position, with Gutiérrez passing Pastor Maldonado for tenth, only to be repassed immediately. Massa was tapped by Pérez into turn 11, but this surprisingly helped the Brazilian and he overtook both Gutiérrez and Maldonado after turn 12. Gutiérrez made a surprise overtake in turn 12, but was offline so defenceless to Massa. Maldonado was also seriously offline, so passed by both Mexicans, and teammate Valtteri Bottas. The Venezuelan lost four positions in one corner.

The only time Hamilton could make it past the Hülkenberg was on lap 48, but was immediately repassed with assistance from DRS. Nico's amazing first sector speed and traction out of turns 1 and 2 enabled him to hold the Mercedes back. Button and Rosberg were close behind the trio, but after Rosberg passed Button for seventh, both drivers back off for the rest of the race.

Vettel finished the race, only four seconds ahead of the Lotuses, with Romain told on the radio to smile on the podium despite his frustration at losing to Räikkönen. Hülkenberg held off Hamilton and Alonso to record his best position of the year, with Pérez rounding out the points after Daniel Ricciardo's retirement on lap 52.