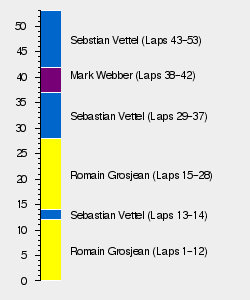 In the race, Vettel won, with Webber second. Romain Grosjean, who took the lead at the start from fourth on the grid, came third.

The Suzuka circuit is unchanged for this year's event, with one DRS zone planned for the event, along the start-finish straight. The detection point will be just before the Casio Triangle chicane.

Pirelli will bring their hard and medium tyres to Japan as "prime" and "option" compounds respectively.

During the previous round in Korea, both Jules Bianchi and Charles Pic were reprimanded for exceeding the maximum safe speed while behind the safety car. This was both drivers' third reprimand of the season, earning both a 10-place penalty for the Japanese Grand Prix.

Sebastian Vettel leads Fernando Alonso by 77 points ahead of this race. With only five races remaining, Vettel can wrap up a fourth consecutive title this weekend if he outscores the Spaniard by 23 points (by winning with Alonso outside of the top-8). Red Bull lead Ferrari and Mercedes by 118 and 119 points respectively in the Constructors' Championship. Unlike the Drivers' title, Red Bull will have to wait at least until India in two weeks to claim their fourth title.

During the weekend, Spanish driver María de Villota, was found dead in her hotel room. She died of cardiac arrest, believed to be a result of her testing accident in May 2012.

Romain Grosjean made an excellent start from fourth to take the lead at the first corner as both Red Bulls bogged down at the start. Lewis Hamilton cut across Sebastian Vettel, with the German's front wing hitting Hamilton's right rear tyre and giving the unfortunate Briton a puncture that he would eventually retire from. Mark Webber ended the first lap second, followed by Vettel, who had no front wing damage, while Nico Rosberg had overtaken Felipe Massa for what became fourth. Fernando Alonso made a strong start as usual to move to sixth, while Esteban Gutiérrez made up five positions (including Hamilton).

At the back, Adrian Sutil efficiently made his way past the backmarkers before Giedo van der Garde and Jules Bianchi collided at the first corner, knocking both drivers out, and disabling DRS when it usually would have become active on lap 3. At the end of the lap, Charles Pic took the drive-through penalty he received before the race.

Once the accident was cleared, and DRS enabled, drivers started overtaking. On the first corner of lap seven, Kimi Räikkönen overtook Jenson Button and Daniel Ricciardo got past Valtteri Bottas, while Alonso started attacking Massa for fifth.

Webber was the first frontrunner to make a pit stop, pitting on lap 11. Massa and Räikkönen also pitted on the same lap. Leader Grosjean reacted immediately, pitting on lap 12, emerging ahead of Webber, while Rosberg reacted to Massa's stop. Alonso pitted on lap 13 and Vettel was the last of the drivers on the medium compound to pit on lap 14.

After the pit stops, Grosjean lead Webber, with Vettel close behind. Ricciardo, who was on the hard tyre, was fourth due to not pitting. Rosberg was fifth, but had to perform a drive-through penalty for an unsafe release, in which he nearly crashed in Sergio Pérez. As a result, Nico Hülkenberg took fifth place, overtaking both Ferraris, with Massa ahead of Alonso again. Gutiérrez was eighth, Räikkönen ninth, Pérez tenth ahead of Button after an overtake and Rosberg twelfth.

Ricciardo's strategy meant held up Hülkenberg and the two Ferraris, which allowed Alonso to get past his teammate as they started lap 20. Ricciardo, having been overtaken by Hülkenberg at 130R, fell into the clutches of the train of cars that now also contained Gutiérrez, Räikkönen and Pérez, finding himself overtaken by Alonso before he pitted and fell to sixteenth. In the chaos caused by the bunching up of the pack, Gutiérrez nearly overtook Massa before the Mexican was overtaken by Räikkönen. Behind them, Rosberg overtook Button into 130R. As Ricciardo held up the group, the leading trio had pulled out a gap of 20 seconds.

Button pitted, from 11th, on lap 23. His mechanics had a problem with his right rear wheel, which stuggled to come off, losing him time. Rosberg pitted the following lap, without causing any problems. Webber pitted on lap 25, changing his intended strategy from a two-stop to a three-stop, falling to third. Massa pitted on lap 28 from sixth. Further back, Ricciardo passed Sutil at 130R, going off track in the process, which gave him a drive-through penalty.

Grosjean pitted for the final time on lap 29, falling behind Webber, who was driving very quickly, and allowing Vettel a second stint in the lead. Hülkenberg also pitted on lap 29. Alonso, Gutiérrez and Pérez pitted on the following lap; Hülkenberg remained ahead of Alonso, while the two Mexican drivers fell down the order, Pérez unaided by problem with his right rear. Räikkönen's pit stop on lap 31 placed him back behind Massa. Massa then received a drive-through penalty for speeding in the pit lane, which dropped him to 11th behind Gutiérrez.

Vettel was staying out for longer than expected on his second stint, which meant he could put on the quicker medium compound or push hard on new hard tyres, while in just five laps Webber had pulled out ten seconds on Grosjean and was quickly closing down on Vettel. Vettel pitted on lap 37, allowing Webber to take a clear lead and the German was three seconds behind Grosjean. Vettel immediately started setting very quick lap times, and was very soon on the back of Grosjean.

Rosberg and Button each pitted for a third scheduled time on laps 39 and 40 respectively. Rosberg found himself in tenth and Button fourteenth. The Brit started attempting to carve his way back up the field.

Vettel overtook the Frenchman as the the drivers began their 41st laps, and was just under 15 seconds behind leader Webber. Webber pitted the following lap, putting on the medium tyre, falling to third and setting off on a charge against the two leaders. Pérez picked up a left rear puncture in a collision with Rosberg and had to make an unscheduled pit stop on lap 42. The McLaren driver dropped down to 17th, his race ruined.

Webber set the fastest lap of the race on lap 44 as he closed down on Grosjean, getting within DRS range two laps later. Alonso finally managed to pass Hülkenberg going into the first corner of lap 46, with the German immediately being put under pressure by Räikkönen; and the following lap Massa was overtaken by Rosberg. Behind them, Button overtook Paul di Resta to bring himself back into a points scoring position.

Grosjean held off Webber for five laps, which allowed Vettel to extend his lead and to make sure of victory. Gutiérrez held off Rosberg to hold onto seventh, while Hülkenberg defended well against Räikkönen, until the Finn found a way past.

As Grosjean and Webber encountered a large amount of traffic, the Australian finally found a way past the Lotus with two laps left. However, Webber was left without enough time to catch Vettel. Button, on fresher tyres, overtook Massa for ninth with about a lap left.

Vettel won the race, seven seconds ahead of Webber, with Grosjean a further three seconds down, the Frenchman stopping his car soon after he crossed the finish line. Alonso finished fourth, 45 seconds behind Vettel, with Räikkönen close behind. Hülkenberg crossed the line sixth. Gutiérrez held off Rosberg for seventh, the Mexican scoring points for the first time and the German finishing the race low on fuel and stopping just after the pit lane exit. Button was ninth and Massa tenth, and Di Resta finally finished a race, unluckily in eleventh but still on the lead lap. Vergne, who was the first of the lapped runners, came twelfth, followed by Ricciardo, Sutil, Pérez, Pastor Maldonado, Bottas, Pic and Max Chilton.

Red Bull scored their second one-two of the season, and extended their Championship advantage to 148 points. With just 172 points remaining, it is likely that Red Bull will secure their fourth consecutive title in India.

Sebastian Vettel's Championship lead was extended to 90 points, and with four races remaining, he has all but sealed the title as there are only 100 points available. To take his fourth consecutive title, Vettel needs to finish the next race in fifth place, for even if Vettel only scores a total of ten points in the final four races and second-placed Fernando Alonso wins said four races, Vettel will have nine wins to Alonso's six, and will take the title. Alonso admitted after the race that he had given up on the title.