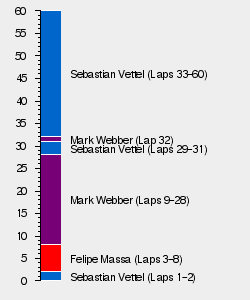 In the race, Vettel won by a clear margin despite suffering issues with his car in the latter stages of the race. Mark Webber would most likely have made it a Red Bull one-two, but retired with an alternator failure. Rosberg took second place, ahead of an impressive Romain Grosjean, who had started seventeenth, and Felipe Massa, who despite reaching second place at the end of the first lap and leading could only finish in fourth place. Sergio Pérez performed admirably to secure a fifth place, his best result of the season. Fernando Alonso damaged his front wing at the start of the race after unavoidable contact with Webber, and was unable to fully recover as the Spaniard finished eleventh.

As a result of his victory, combined with Alonso's non-score, Vettel took his fourth consecutive World Championship title at the race, performing donuts on the start/finish line and praying to his car. Red Bull-Renault took their fourth consecutive World Championship as well, after neither Ferrari or Mercedes were able to score enough points in comparison to the Austrian team.

Before the race, it was announced that Daniil Kvyat was to replace Daniel Ricciardo for the second Toro Rosso seat.

The DRS zone was increased by 80 metres for the second year in a row.

On the Thursday before the race, it was announced that the Indian Supreme Court was to hear a case that could potentially cancel the race on Friday. The petition to cancel was filed on the grounds that the organisers, Jaypee Sports International Limited, have not paid taxes at a previous event. The running of the event wouldn't have been affected until the result of the hearing was announced.

However, the court delayed the hearing the hearing by a week, meaning the Grand Prix ran as planned.

Sebastian Vettel enters the race with a 90-point lead over Fernando Alonso with four races left, and is likely to secure the title.

Vettel will win the title if he can score at least ten points in the remaining four race, even if Alonso can win all four races. This is because Vettel has already won nine races; were Alonso to win all four his season total would be six, and hence, Vettel wins the tiebreaker.

Red Bull-Renault are also in a position in which they can win the Championship, as they hold a 148-point lead over Ferrari and 158-point lead over Mercedes. The maximum obtainable in three races is 129.

Sebastian Vettel scored the fastest time in FP1 as Red Bull got a 1-2 in the opening practice with Mark Webber in second place. Fernando Alonso who was the only contender left in the title race struggled as he suffered a blow as an apparent gearbox failure force an early end to his session. James Calado was the only reserve driver to participate in the first session replacing Paul di Resta.