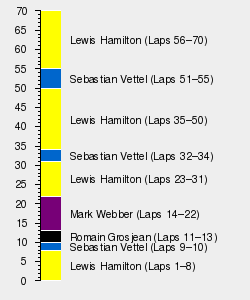 Lewis Hamilton took pole position from Sebastian Vettel, who starts alongside the Brit on the front row. Hamilton went on to win his first and only race in 2013 for Mercedes by over ten seconds, ahead of Kimi Räikkönen, who valiantly held off Vettel for the second podium spot.

The full entry list for the 2013 Hungarian Grand Prix is shown below: