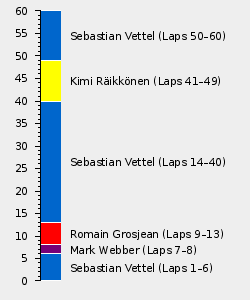 Mercedes' Lewis Hamilton claimed pole position in qualifying. Red Bull-Renault driver, Sebastian Vettel will join him on the front row, followed by the German's team-mate Mark Webber who was out qualified by Vettel for the ninth consecutive race.

But in the race, the wheel from Mark Webber's car hit a cameraman.

Vettel won the race from Kimi Räikkönen and Romain Grosjean, with Fernando Alonso not too far behind the three drivers. The Lotus drivers had pressured Vettel throughout the race, but the German held out to win his first German Grand Prix. Polesitter Hamilton eventually scrambled fifth place with Jenson Button performing well for sixth.

The full entry list for the 2013 German Grand Prix is shown below:

* Charles Pic changed components in his gearbox and received a five-place grid penalty.

The cameraman involved was revealed to be Paul Allen. He suffered heavy bruising but recovered from his injuries.

Retrieved from "https://f1.fandom.com/wiki/2013_German_Grand_Prix?oldid=62933"
Community content is available under CC-BY-SA unless otherwise noted.