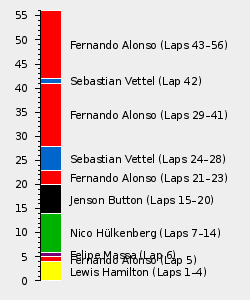 The event marked Fernando Alonso's 200th Grand Prix start, and after qualifying in third place, the Spaniard won the race by a clear ten seconds over Kimi Räikkönen, whose nosecone and front wing were damaged in a collision with Sergio Pérez. Polesitter Lewis Hamilton managed to finish third, fending off a late charge by Sebastian Vettel.

After the Malaysian round of the championship, Sebastian Vettel took the lead from Kimi Räikkönen to put his at 9 points. Mark Webber was third after Malayasia after he finished 2nd in the race. But it wasn't without it hiccups as Mark Webber said that we would round out the season at Red Bull, even though for the mishap.

The full entry list for the 2013 Chinese Grand Prix is shown below:

* Mark Webber qualified 14th, but was excluded from qualifying and put to the back of the grid after not having enough fuel in the car to supply a one-litre post-qualifying sample.

Retrieved from "https://f1.fandom.com/wiki/2013_Chinese_Grand_Prix?oldid=75024"
Community content is available under CC-BY-SA unless otherwise noted.