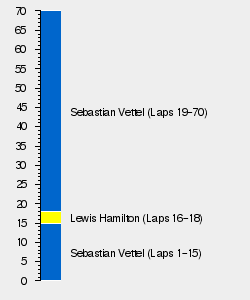 Sebastian Vettel took pole position for Red Bull in a wet qualifying, with Mercedes' Lewis Hamilton in second. Valtteri Bottas performed admirably to secure third place on the grid. His team, Williams, had not yet scored a point in 2013.

Vettel produced a flawless drive on Sunday to win the race by nearly fifteen seconds ahead of Fernando Alonso, who himself drove a very strong race, picking off fellow frontrunners to minimise the points loss to his Championship rival. Hamilton managed to secure the final podium place, a second down on Alonso and ten seconds clear of Mark Webber. Bottas' race did not go as planned, the Finn finishing a lap down in fourteenth. Other strong performances came from Jean-Éric Vergne, who finished in sixth, his best finish to date; and Paul di Resta, who after qualifying a disappointing 17th, completed 57 laps on the medium compound, allowing him to finish in seventh place.

Vettel's win was both his and Red Bull's first in Canada.

The event was marred by the death of Mark Robinson, a track marshal, who was run over by a recovery vehicle while it was removing the Sauber of Esteban Gutiérrez. The accident did not kill Robinson instantly, he succumbed to his injuries in hospital. It was the first time anyone had died in F1 since the 2001 Australian Grand Prix.

In the Drivers' Championship, Sebastian Vettel went into the Canadian Grand Prix with a 21 point lead over Kimi Räikkönen, with Fernando Alonso 8 points further adrift in third. Red Bull-Renault led Ferrari by 41 points in the Constructors' Championship.

For causing an avoidable accident at the Monaco Grand Prix, Romain Grosjean was to take a ten-place grid penalty at this event.

The FIA announced ahead of the Canadian Grand Prix that an International Tribunal will be held with regard to a test session conducted by Mercedes on behalf of Pirelli prior to the Monaco Grand Prix. The event, which is the subject of formal protests by multiple teams, appears to contravene the Sporting Regulation banning teams from in-season testing with 2012 or 2013 season cars. However, Mercedes claim that the event was sanctioned under a contract between tyre manufacturer, Pirelli and the FIA. A similar protest was made against Ferrari about another test that the Italian team conducted with Pirelli. Ferrari, however, were absolved of any blame when it was confirmed that they had used their 2011 car.

In addition to the Super Soft and Medium compounds, a third, experimental dry tyre will be made available to teams in Friday's practice sessions. This tyre, which is harder than the other two, and built on a kevlar base rather than the traditional steel, is being trialled ahead of a potential introduction at the British Grand Prix.

The FIA have confirmed that the DRS zones for this event, as in 2011, were to be along the two long straights between the hairpin (turn 10) and the start-finish straight. These were to be fed by a single DRS-detection point before turn 10.

The full entry list for the 2013 Canadian Grand Prix is shown below:

Following overnight rain, the morning session started out with a very wet track. As a result, the first few cars out all started off on the full wet tyre.

Of the 22 race drivers, the only absentee in FP1 was Caterham driver Charles Pic. The Frenchman was deputised by American youngster, Alexander Rossi who took control of an F1 car for the first time since FP1 at the 2012 Spanish Grand Prix.

*Grosjean qualified 19th, but was given a ten-place grid penalty for colliding with Daniel Ricciardo at the 2013 Monaco Grand Prix.

†Räikkönen and Ricciardo both received two-pace grid penalties for lining up incorrectly at the pit exit at the restart of Q2.