Formula 1 Wiki
Register
Don't have an account?
Sign In
Advertisement
in: 2013 Grands Prix, British Grand Prix, Formula One races in the United Kingdom 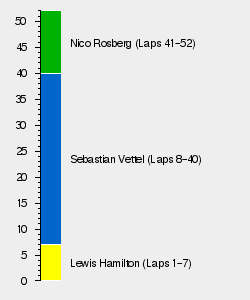 The 2013 British Grand Prix was the 8th round of the 2013 Formula One Season. It was held over the weekend of 28th–30th June 2013 at the Silverstone Circuit, between Buckinghamshire and Northamptonshire, UK. It was the 64th consecutive running of the British Grand Prix as part of the Formula One World Championship, the 47th at the Silverstone Circuit, and the third on the current layout.

Lewis Hamilton took pole position in front of his home crowd, his second pole for Mercedes. Teammate Nico Rosberg joins him on the front row, with Championship leader Sebastian Vettel in third. Fernando Alonso disappointed by qualifying in tenth, which became ninth after fifth-placed Paul di Resta was excluded from qualifying and sent to the back of the grid for having an underweight car.

The race was affected by left-rear tyre punctures to Hamilton, Felipe Massa and Jean-Éric Vergne. Sergio Pérez had a failure of the same tyre in free practice, and then had another in the last few laps. Esteban Gutiérrez had a left-front tyre puncture, making it five punctures. It later emerged that Alonso had also been subject to a puncture, to his right-rear tyre, but made it to the pits in time.

In the end, Rosberg won, ahead of Mark Webber and Alonso. Webber started horribly, but recovered in impressive style. Vettel, who had inherited the lead following Hamilton's tyre failure, suffered a gearbox failure, handing the lead to Rosberg.

Contrary to what had been planned, Pirelli will supply the Hard and Medium compounds of their steel-based tyres for this weekend. An experimental Kevlar-based construction had been tested in Canada with a view to introduction at Silverstone, but has been temporarily rejected due to the limited dry-running in Canada leading to insufficient testing.

An International Tribunal took place prior to this event to discuss the implications of an apparently illegal test conducted by Mercedes on behalf of Pirelli following the Spanish Grand Prix. Both parties were found guilty of illegal testing in line with Rule 22.4(h) of the FIA Sporting Regulations, however no race or championship sanctions were applied as both parties had acted in good faith and Mercedes had not intended to gain a sporting advantage. Instead, both parties were reprimanded and Mercedes suspended from the upcoming Young Drivers Test.

On the Thursday before the race, Mark Webber announced his retirement from the sport for the end of the season, meaning it is to be Webber's last British Grand Prix.

The full entry list for the 2013 British Grand Prix is shown below:

The first practice was not what either the fans, the drivers or the teams wanted. James Rossiter was meant to take part in the session for Force India, but the extreme wet weather meant he did not drive. And to an extent, nor did anyone else. While all the drivers bar Kimi Räikkönen went out on track, it took until the 77th minute of the 90-minute session for a driver to complete a full lap, Daniel Ricciardo setting a time of 2:00.029. He eventually completed ten laps, his fastest time being 1:54.249 and the fastest of the session. Charles Pic had an accident when he slid out of exit of Club Corner into the tyre wall with three minutes left.

* Paul di Resta qualified fifth, but was excluded from qualifying for running an underweight car. He was forced to start from the back of the grid.