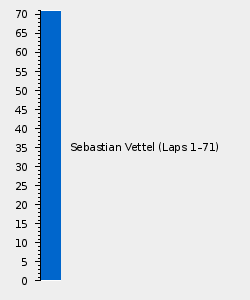 The 2013 Brazilian Grand Prix (officially the Formula 1 Grande Prêmio Petrobras do Brasil 2013) was the 19th and final round of the 2013 Formula One Season. It was the 41st consecutive season to feature the Brazilian Grand Prix and the 24th on the current layout of the Autódromo José Carlos Pace. It was the final race that used 2.4 litre V8 engines.

Sebastian Vettel took pole position in extremely wet conditions, which resulted in a delay to the final session of qualifying. Nico Rosberg qualified second, half a second behind, with Fernando Alonso third and more than a second slower than Vettel. Mark Webber, who was qualifying for his final race, only managed fourth.

In a race which had very light drizzle throughout, Vettel won, but not without problems. Webber drove strongly to finish second, but was unable to challenge his teammate. Both Red Bull drivers encountered issues during pit stops, Webber's first stop was delayed by a wheel gun failing to work properly; Vettel entered a pit stop with his team not ready. Webber also managed to sign off his career with the fastest lap.

Alonso drove strongly to finish not too far behind the Red Bulls. Fourth was Jenson Button, who took McLaren's best result of the season after he had started down in fourteenth.

Although the Drivers' and Constructors' titles were clinched three races earlier in India, the all-important battle for 2nd in the Constructors' Championship will most likely go down to this final round, as will the battle between Caterham and Marussia for 10th place and the financial boost that comes with it.

At the last race, Sebastian Vettel wrapped up a record-breaking eighth consecutive Grand Prix win. Another win this weekend, a ninth in nine starts, would equal Alberto Ascari's all-time record in this respect. A win would also be his 13th of the season, which would equal Michael Schumacher's record of wins in a season.

A race finish for Max Chilton would see him become the first driver to finish all races in his rookie season in F1. The current record for finishes in a rookie season is shared by Chilton, Paul di Resta and Tiago Monteiro at 18.

At the end of the race, Vettel and Massa did donuts.

Retrieved from "https://f1.fandom.com/wiki/2013_Brazilian_Grand_Prix?oldid=77794"
Community content is available under CC-BY-SA unless otherwise noted.