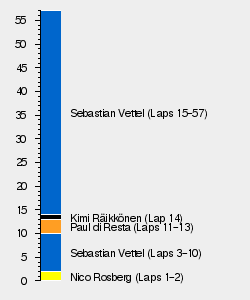 Nico Rosberg started on pole after qualifying ahead of Sebastian Vettel and Fernando Alonso. In the race, Rosberg did not have the pace of Vettel or Alonso, and after the Red Bull driver got ahead of his fast-starting Ferrari rival, Vettel led the race ahead of Alonso. Alonso suffered an issue with his DRS, and Vettel raced clear ahead of Paul di Resta. In a race full of overtaking, Vettel won the race by nearly ten seconds over Kimi Räikkönen, with Romain Grosjean completing the podium after overtaking Di Resta towards the finish.

Like the previous two Bahrain Grands Prix, protests marred the event. Unlike the 2011 event, but more like the 2012 event, the race went ahead without too many issues.

In terms of the championship standings, Sebastian Vettel's lead was reduced to just three points to Kimi Räikkönen, after the German was unable to pass Lewis Hamilton in the final few corners of the Chinese Grand Prix. Fernando Alonso's win took him to just nine points behind Vettel.

In the Constructors' Championship, Red Bull-Renault lead Ferrari by five points, with Lotus-Renault and Mercedes within thirty points of the leaders.

After crashing into Adrian Sutil and forcing both drivers out of the race, Esteban Gutiérrez had a five-place grid penalty. Mark Webber's collision with Jean-Éric Vergne cost the Australian three places on the Bahrain grid.

The full entry list for the 2013 Bahrain Grand Prix is shown below:

* Mark Webber was given a three-place grid penalty after his collision with Jean-Éric Vergne at the Chinese Grand Prix. Having qualified fifth, his penalty was applied after Lewis Hamilton's penalty (Hamilton qualified fourth), and Webber was placed at seventh.

† Lewis Hamilton was given a five-place grid penalty for changing his gearbox after third practice. Having qualified fourth, he was pushed back to ninth on the grid.

‡ Esteban Gutiérrez qualified eighteenth, and was given a five-place grid penalty for his collision with Adrian Sutil that forced both drivers out of the race. He will start in last place on the grid.