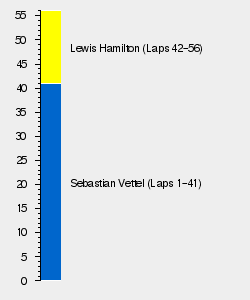 Hamilton won the race, taking the lead from Vettel with fourteen laps remaining. Vettel finished second, with Alonso driving another strong race to achieve another podium, albeit nearly 40 seconds down on the leading pair, with teammate Massa also recovering strongly to finish fourth.

As a result, Vettel managed to extend his championship lead over Alonso by three points to thirteen. Red Bull-Renault required only four points from the race to win their third constructors' title, and with Vettel coming second they achieved the feat.

Formula One returned to the United States for the first since since 2007, where the race was held at Indianapolis. The idea of a race in Austin, Texas was first proposed in 2010, and the Circuit of the Americas broke ground on January 2, 2011. It was completed on September 21, 2012, and officially opened a month later, with American motor racing legend and the country's only living F1 championship winner, Mario Andretti, driving the circuit in a Lotus 79.

As for the championship battle, Sebastian Vettel, who was competing in his 100th race, led Fernando Alonso by ten points after the former's impressive comeback up the field at the Abu Dhabi Grand Prix. Vettel's team, Red Bull-Renault, required just four points take their third consecutive constructors' title.

The DRS zone was the long back straight between turns 11 and 12.

The full entry list for the 2012 United States Grand Prix is shown below:

† Ferrari tactically removed the seal on Felipe Massa's gearbox, incurring a five-place grid penalty for the Brazilian (qualified seventh). This moved Fernando Alonso up to seventh and onto the clean side of the grid.