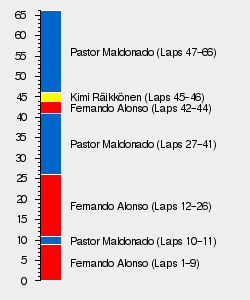 The 2012 Spanish Grand Prix (officially Gran Premio de España Santander 2012) was the fifth race of the 2012 Formula One Season. It was the 22nd time the event was held at the Circuit de Catalunya in Montmelo, near Barcelona. It was the 54th running in total of the Spanish Grand Prix. The race took place on 13 May 2012.

Following qualifying, Lewis Hamilton was going to start the race on pole. However, he was stripped of his pole because he did not have the required amount of fuel (one litre) in his fuel tank.[1] As a result, Pastor Maldonado starts from pole for the very first time in his career. Fernando Alonso will start second, and Romain Grosjean will take third place on the grid.

As for the race, Fernando Alonso made a good start to take the lead at the first corner. He held the lead for two stints, before a strong out lap by Pastor Maldonado gave Maldonado the lead. Alonso closed down Maldonado before their final pitstops, but Maldonado held off Alonso. After their pitted, Kimi Räikkönen temporarily held the lead before being passed by Maldonado and Alonso in successive laps. After about ten laps of pressure, Alonso's tyres started to go off, Maldonado, who had pitted earlier, had controlled his tyres better. Maldonado then went on to win his first race, witth Alonso second and Räikkönen third. Williams won their first race since the 2004 Brazilian Grand Prix.[2]

However, the result was marred as a fire in Williams garage injured four Williams team members and one Force India team member.[3]

The full entry list for the 2012 Spanish Grand Prix is shown below:

* Narain Karthikeyan failed to set a time within the 107% time, but was given the stewards' permission to race.

† Lewis Hamilton was stripped of his pole and placed at the back of the grid for not having enough fuel in his car after qualifying.