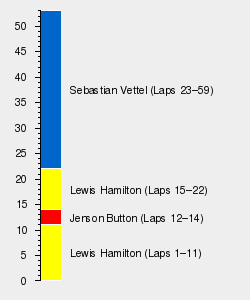 Due to two lengthy Safety Car periods, the race was cut 2 laps short of its scheduled 61 laps as the two-hour race time-limit was enforced after 59 laps. As the race distance exceeded 75% of the scheduled race distance, full points were awarded.

The race was won by Red Bull-Renault driver and reigning World Champion, Sebastian Vettel, who took over the lead on lap 23 from Lewis Hamilton, after Hamilton's car developed a gearbox failure. Second place was taken by Jenson Button of McLaren-Mercedes and third was championship leader Fernando Alonso of Ferrari.

The results left Alonso leading the Drivers' World Championship standings by a 29 points over Vettel. Kimi Räikkönen remains third. In the constructors' championship, Red Bull-Renault extended their lead over McLaren-Mercedes to 37 points.

The alterations made to the Marina Bay circuit last year remained for the 2012 event, including the removal of kerbs from the inside of turn 13, which were replaced by a flat painted boundary. The DRS zone, as last year, was down the long straight from turn 4 to turn 6. This caused problems due to a fast kink in the middle of the straight which caused major slides for numerous drivers.

Allan McNish would serve as the drivers representative on the race steward's panel for the Singapore Grand Prix in 2012. McNish competed in a single season in Formula One for the Toyota team during the 2002 Formula One Season.

The full entry list for the 2012 Singapore Grand Prix is shown below:

The first practice session got off to a slow start, the first 10 minutes of the session saw little action on track after a major storm had blown over the Singapore Circuit in the afternoon. The session started with much debris from the storm stricken across the track, this mainly consisted of a large degree of leaves from the nearby trees around the circuit.

The session saw both Red Bull and McLaren perform significantly stronger than their rivals, settting the stage for a strong rivalry throughout the weekend. McLaren held advantage over Red Bull in the first sector whilst Red Bull appeared stronger in the second sector. The final sector saw a stalemate between the two teams.

By the end of the session it was the Red Bull of Sebastian Vettel that had topped the timesheets followed by the two McLarens of Lewis Hamilton and Jenson Button just behind him in the timesheets. Vettel's teammate Mark Webber could not match his younger teammate and finished the standings in 6th. Championship leader Fernando Alonso finished best of the rest in his Ferrari behind the McLarens and Vettel. Pastor Maldonado demonstrated strong pace for Williams to finish the session 5th.

Further down the field, Lotus and Mercedes struggled throughout the session and did not display any signs of pace at the Marina Bay circuit. Kimi Raikkonen finished the session 12th in his Lotus whilst teammate Romain Grosjean, who had made his return to F1 in Singapore after his suspension from the Italian Grand Prix finished the session 15th. Mercedes faired little better with Michael Schumacher finishing 14th with Nico Rosberg finishing a distant 18th.

The Singapore Grand Prix saw the appearance of only one Third Driver in the first practice session with Chinese driver Ma Qing Hua making his second appearance in an F1 practice session where he stood in for Narain Karthikeyan at HRT. Ma Qing Hua put in a strong performance to finish the session only a few tenths behind teammate Pedro de la Rosa in last place.

The second practice session continued to see the Red Bull's and McLaren's battling for supremacy. Sebastian Vettel once again topped the timing sheets in his Red Bull whilst the McLaren of Jenson Button finished the timing sheets just behind. Their teammates Mark Webber and Lewis Hamilton finished just behind in 4th and 5th place. Fernando Alonso managed to break the Red Bull and McLaren lockout by finishing 3rd in the session in his Ferrari.

Alonso's teammate Felipe Massa had struggled in the first practice session where he finished 16th yet was able to improve his game to finish 9th in the second session. Mercedes had struggled in the first practice session however were able to make improvements by Practice 2 which saw Nico Rosberg finish 8th and Michael Schumacher finish 11th. Lotus, the other big name to struggle in FP1 was able to make improvements to a lesser degree for FP2 which saw Romain Grosjean finish the session 10th and Kimi Raikkonen finish 12th.

The Practice session was brought to an ubrupt halt midway through the session when the Williams of Bruno Senna hit the wall causing him to spin out which left his car severely damaged. Senna finished the session 17th. Four places behind teammate Pastor Maldonado.

Sebastian Vettel completed his domination of the practice sessions after topping the timesheets in the third and final practice session for Red Bull. His main rivals being McLaren and Ferrari were only just behind with Lewis Hamilton in 2nd and Fernando Alonso in 3rd. The second Red Bull of Mark Webber did not fair as well as his teammate in which he grazed the wall at the exit of turn 13. This left Webber to finish a disappointing 11th in the final standings.

Other drivers who notably fell victim of the turn 13 barrier was the Sauber of Sergio Perez who like Webber sustained minor damage to his car. In a more serious incident, the Caterham of Vitaly Petrov slammed into the barrier sustaining terminal damage to the rear end of his car. The car was forced to stop out on track and brought out the red flags for the session, ending the final practice session earlier than intended.

Kimi Raikkonen was able to improve his Lotus to finish a strong 5th in the standings just behind the Force India of Nico Hulkenberg and ahead of the second Ferrari of Felipe Massa. Jenson Button notably had mechanical problems which saw him finish a disappointing 12th in the standings. Another driver to suffer from mechancial problems was Timo Glock who stopped his Marussia out on track with throttle failure.

As the first qualifying session got underway, the underwhelming pace of the Sauber's was evident. Both Sergio Perez and Kamui Kobayashi struggled in the session and were fighting with the Toro Rosso's to continue on into Q2. Perez managed to put in a strong lap time towards the end of the session to finish the session 8th on the grid, however teammate Kobayashi did not make the cut and qualified a disappointing 18th. The usual band of Caterham's, Marussia's and HRT's followed at the rear end of the pack.

Up at the front, the Lotus's looked strong with Romain Grosjean finished the session in first place with teammate Kimi Raikkonen finishing in third. Paul di Resta split the two Lotus's by finishing in second place in his Force India. Sebastian Vettel finished the session fourth in his Red Bull with Lewis Hamilton in fifth and the second Red Bull of Mark Webber finishing 6th. Webber got in some slight trouble where he supposedly blocked one of the flying laps made by Marussia's Timo Glock, the stewards however opted to take no further action on the incident.

Before the race started, there was a minute silence was held for Sid Watkins, who passed away on September 12. A book of remembrance was also available for people to sign their condolences over the weekend.