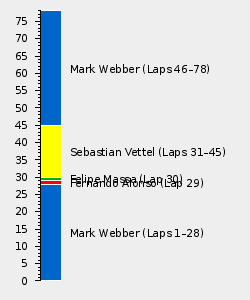 The 2012 Monaco Grand Prix was the 71st running of the most famous race in Formula One. The race, which was the sixth race of the 2012 Season, took place on the 27 May 2012. As in previous years, the first two free practice sessions took place on a Thursday and the support races were on the Friday.

The full entry list for the 2012 Monaco Grand Prix is shown below:

* Michael Schumacher was relegated five places on the grid for causing an avoidable accident with Bruno Senna during the 2012 Spanish Grand Prix (Qualified 1st).

† Sergio Pérez crashed in Q1 (first qualifying session) and did not set a time, meant he had to get Steward's permission to race, which he was granted permission to do so. Sauber changed his gearbox, and thus incurred a five-place grid penalty.

‡ Pastor Maldonado was relegated ten places for causing an avoidable accident with Sergio Pérez during FP3 (Saturday's practice session) (Qualified 9th). Williams also changed his gearbox, which incurred a five-place grid penalty. Sauber notified the FIA of the gearbox change before Williams did, and as a result Maldonado's gearbox penalty was applied after Pérez's, and he started from last on the grid.

Retrieved from "https://f1.fandom.com/wiki/2012_Monaco_Grand_Prix?oldid=75735"
Community content is available under CC-BY-SA unless otherwise noted.