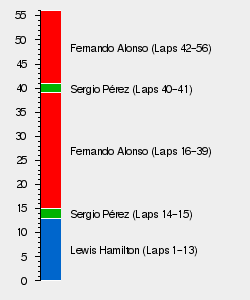 The 2012 Malaysian Grand Prix (formally the 2012 Formula 1 Petronas Malaysia Grand Prix) is a Formula One that took place at the Sepang International Circuit in Sepang, Malaysia, on the 25th of March 2012. It was the second race of the 2012 season.

The race was won by Ferrari's Fernando Alonso, an unexpected result. The Ferrari F2012 has been considered a poor car, but in the wet conditions, the car-driver combination showed up well. Another unexpected result was the second place achieved by Sergio Pérez of Sauber, who gave Alonso a run for his money at the car.

The full entry list for the 2012 Malaysian Grand Prix is shown below:

The full results for the 2012 Malaysian Grand Prix are outlined below: