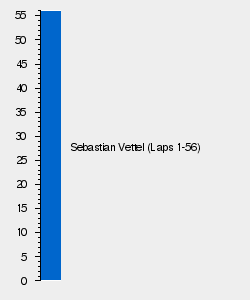 The 2012 Korean Grand Prix was the 16th race of the 2012 Formula One Season. It was held at the Korea International Circuit near Yeongam, South Korea on October 14 2012.

Mark Webber started the race on pole position, ahead of teammate Sebastian Vettel.

Going into the race, Ferrari driver Fernando Alonso led the Drivers' World Championship, a lead which he had held since the European Grand Prix in June.

The Korea International Circuit was unchanged from the 2011 event, despite complaints by numerous teams about the dangerous pit-entry and pit-exit. The pit entry is on the racing line behind a high wall, so fast cars exiting the final corner cannot see cars ahead slowing down for the pit-entry. Also, the pit-exit leads directly into the braking zone for turn 1. This led to a collision in the second practice session in 2011, when Nico Rosberg hit Jaime Alguersuari as the Spaniard was emerging from the pit-lane. In the 2012 race, no major incidents were caused by the unconventional pit-lane.

Pedro de la Rosa made his 100th career start in this race. He started 22nd on the grid before retiring on lap 17 with a throttle malfunction.

The full entry list for the 2012 Korean Grand Prix is shown below:

* Daniel Ricciardo was given a five-place for an unscheduled gearbox change.

† Narain Karthikeyan did not set a time due to a brake failure, but was allowed to race at the steward's discretion.

‡ Charles Pic was given a ten-place grid penalty for using a ninth engine this season.