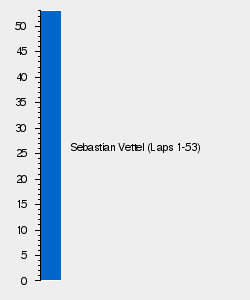 Sebastian Vettel won in a dominant display, winning the race, leading every lap from pole position and setting the fastest lap, his second Grand Chelem, after the 2011 Singapore Grand Prix and second consecutive victory. Second was Felipe Massa, who secured his first podium since the 2010 Singapore Grand Prix, over two years ago. Kamui Kobayashi, who started from third on the grid, mirrored Aguri Suzuki's efforts at the 1990 Japanese Grand Prix by finishing in third place. It was the first podium for a Japanese driver since Takuma Sato at the 2004 United States Grand Prix.

Vettel's win made him the first driver to complete back-to-back victories in 2012.

The result significantly cut Fernando Alonso's Drivers Championship lead to just 4 points, after the Spaniard spun out with a puncture at the first corner. Vettel's win extends Red Bull's lead in the Constructors' Championship to 41 points over McLaren-Mercedes.

After a two-week break, Ferrari driver Fernando Alonso went into the event leading the Driver's World Championship at a slightly reduced points margin to second placed Sebastian Vettel in the Red Bull-Renault, who sat 29 points behind the championship leader. After Vettel's win at the previous event in Singapore, Red Bull-Renault were able to extend their lead in the Constructors World Championship over the second placed team McLaren-Mercedes by a 36-point margin.

Following his collision with Jean-Éric Vergne in Singapore, Michael Schumacher will take a 10-place grid penalty for the Japanese Grand Prix.

During the two week break between the Singapore Grand Prix and the Japanese Grand Prix there were some major driver announcements for the 2013 Formula One Season. After some impressive performances in 2012 Sauber-Ferrari driver Sergio Perez was confirmed to be joining the McLaren-Mercedes team for 2013 replacing Lewis Hamilton who had raced with the team since 2007. Hamilton, a major championship contender in 2012 was confirmed shortly after to have joined the Mercedes team for 2013 replacing Michael Schumacher in the team. Shortly after this announcement Schumacher announced his retirement from F1 at the conclusion of the 2012 season.

The full entry list for the 2012 Japanese Grand Prix is shown below:

As the first practice session got underway at Suzuka it was the McLarens that had set the immediate pace at the Japanese circuit. Winner of the 2011 event, Jenson Button set the pace ahead of teammate Lewis Hamilton. Mark Webber presented a strong challenge to the McLaren's in his Red Bull to finish a respectable third in the standings ahead of the two Mercedes's of Nico Rosberg and Michael Schumacher.

Championship leader Fernando Alonso struggled in his Ferrari and could only finish the session 11th, some way off the pace of teammate Felipe Massa who finished 7th in the standings behind the Japanese home favourite Kamui Kobayashi. Another championship contender to struggle in the first practice session was Sebastian Vettel who could only manage a disappointing 17th in the standings.

The second practice session turned out to be heavily action packed with many cars having either accidents or spins. Only 6 minutes into the session, Paul di Resta crashed his Force India at the Spoon Curve meaning that he was unable to set a competitive lap time. Shortly after, Michael Schumacher crashed his Mercedes at the exact same place meaning he would finish the session a disappointing 10th. It was an all round bad session for Mercedes with Nico Rosberg retiring from the session with oil pressure issues at the Esses, midway through the session.

The session saw minor spins for the Caterham of Heikki Kovalainen, both the Sauber's of Sergio Perez and Kamui Kobayashi, Marussia's Timo Glock, Williams's Pastor Maldonado, Ferrari's Felipe Massa and Lotus's Kimi Raikkonen. In the dying minutes of the session however, the Caterham of Vitaly Petrov suffered a rear wing failure which detached from his car sending him flying into the barriers at the first corner. Petrov escaped the accident relatively unscathed.

Up at the front, McLaren and Red Bull continued to set the pace. This time with the Red Bull of Mark Webber leading the times ahead of the McLaren of Lewis Hamilton and his teammate Sebastian Vettelwho had made a strong recovery after a disappointing first practice session. Nico Hulkenberg impressed in his Force India to finish the session a strong fourth in the standings ahead of the recovering Fernando Alonso in the Ferrari.

At the conclusion of the final practice session at Suzuka it was the two Red Bull's that dominated the timing sheets with Sebastian Vettel topping the timesheets ahead of teammate Mark Webber. Ferrari driver Felipe Massa put in a strong performance to finish 3rd at the conclusion of the session, significantly ahead of teammate Fernando Alonso who finished a disappointing 13th.

McLaren did not show particularly strong pace in the session with Jenson Button finishing in 8th position and Lewis Hamilton finishing in 13th position. Towards the end of the session Hamilton notably had a hair raising moment at the Bus Stop Chicane. Hamilton encountered slower cars while entering the chicane whilst on a hot lap, one of these slow cars was the Marussia of Charles Pic who was on an in-lap to the pits. Pic had been driving very slowly on the racing line and was nearly hit at very high speed by Lewis Hamilton who managed to avoid the trailing Marussia at the very last second.

The only other notable incident was when the Force India of Nico Hulkenberg went off the circuit at the second degner and landed his car into the barriers during the final 20 minutes of the session.

†Vergne was demoted places from 17th to 19th for blocking Bruno Senna in Q1.

‡Schumacher was demoted from 13th to 23rd for causing a collision at the Singapore Grand Prix.