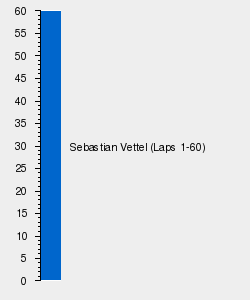 The 2012 Indian Grand Prix (officially 2012 Airtel Indian Grand Prix) was the 17th race of the 2012 Formula One Season, which took place at the Buddh International Circuit on October 28 2012.

The race was won by Red Bull-Renault driver, Sebastian Vettel from pole, leading every lap. It was the third consecutive race in which Vettel had led every lap, and the German's fourth consecutive win. As of the end of this race, Vettel had led 205 consecutive laps since lap 23 of the 2012 Singapore Grand Prix. Spaniard Fernando Alonso continued his run of good form by finishing second, with Vettel's Red Bull team-mate, Mark Webber in third.

Vettel would have clinched a second consecutive (third in total) Grand Chelem as he set the fastest lap on crossing the finish line. However, this record lasted all of ten seconds, as the German's lap time was eclipsed first by Alonso and then Button on the final lap.

Red Bull's Sebastian Vettel carries a 6-point Drivers' Championship lead into the Indian Grand Prix, ahead of Ferrari's Fernando Alonso. Vettel will be looking for a fourth consecutive win after Singapore, Japan and Korea. The Constructors' Championship is lead by Red Bull-Renault who have a 77-point lead over Ferrari. A good result by Vettel and Webber in India could allow Red Bull to clinch the title at the next race in Abu Dhabi.

The circuit, only in its second season of F1, features numerous elevation changes, a number of medium–high speed corners, particularly in sectors 2 and 3, and one of the longest straights on the F1 calendar.

The full entry list for the 2012 Indian Grand Prix is shown below: