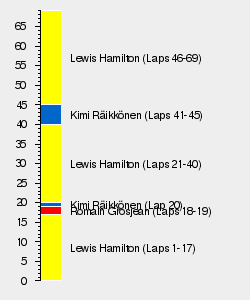 Lewis Hamilton of McLaren-Mercedes secured pole position after dominating qualifying, ahead of Lotus-Renault's Romain Grosjean, his best qualifying performance. Championship leader Fernando Alonso was sixth, but his closest rival in the championship battle, Mark Webber, qualified 11th after failing to progress out of Q2.

Hamilton went on to win the race, the 50th win for a British driver driving for McLaren, ahead of Kimi Räikkönen, who drove a strong middle stint. Grosjean came third, over ten seconds down on Hamilton, after spending much of the race in second. Alonso came in fifth place, with Webber in eighth.

Alonso extended his championship lead to 40 points, still ahead of Mark Webber, and 42 ahead of defending champion Sebastian Vettel. Red Bull-Renault held onto their lead, now 53 points ahead of McLaren-Mercedes.

Red Bull Racing were referred to the race stewards at the German Grand Prix for using engine maps that were potentially in violation of the technical regulations. This meant that Red Bull were accused of manipulating the relationship between the torque produced by the Red Bull RB8 and the degree to which the throttle was open, particularly in medium-speed corners, which allowed more air to pass through the extraust and over the diffuser, which generated more downforce. Although Red Bull were cleared of wrongdoing, since, in the steward's words, they had not broken any rules, the FIA rewrote the rules on throttle mapping before the Hungarian Grand Prix to outlaw the practice entirely.

As for the constructors' championship, Red Bull-Renault lead by 53 points over Ferrari. McLaren-Mercedes moved ahead of Lotus-Renault by one point, and Mercedes passed the 100-point mark.

The full entry list for the 2012 Hungarian Grand Prix is shown below:

Lewis Hamilton was the fastest driver in a dry practice session at the Hungaroring. Hamilton's teammate, Jenson Button, set the second best time, 0.101 seconds down. Fernando Alonso was third, but over half a second down.

Pastor Maldonado had a moment when he needed to take drastic action to avoid Heikki Kovalainen, and the Venezuelan went off the track.

Lewis Hamilton once again was quickest, as the Brit set the first time below 1 minute 22 second in this event. Kimi Räikkönen showed off the pace of the Lotus car by setting the next best time.

The session started dry, but ended very wet. Romain Grosjean had a spin in the dry at the chicane, breaking his front wing. Sergio Pérez also nearly hit Pedro de la Rosa while braking for turn 12.

The predicted rain came down halfway through the session, catching out Heikki Kovalainen at the chicane while the track was not wet enough for dry tyres. Jean-Éric Vergne went out on the full wet tyres with 30 minutes left. Michael Schumacher crashed for the second FP2 in a row, aquaplaning at turn 11 and going straight off into the tyre barrier. He was using intermediate tyres when full wets were required. Later, Bruno Senna went off after running through a puddle of water.

The track began to dry out, but no-one was able to challenge Hamilton's time.

Saturday's one hour session was topped by Mark Webber, ahead of Lewis Hamilton. Sebastian Vettel set the third best time, the Red Bull-Renaults showing pace that was missing on Friday.

The weather was extremely dry, and as a result, no real action occurred despite that the teams were attempting to make up ground lost in FP2's rain. The soft tyre was quicker, and most teams used it only during the second half of the session, as the track heated up.

Kimi Räikkönen set the first quick time, a 1:22.689. However, Hamilton went three tenths quicker a few minutes later, before improving it yet again to 1:21.798, amazingly on the harder tyre. Fernando Alonso used up a set of softer tyres to ensure he stayed in qualifying. The Red Bulls set slow times, nearly going out of qualifying earlier than normal, with Mark Webber in 16th and Sebastian Vettel in 17th.

Lewis Hamilton topped Q2 by 0.347 seconds over Sebastian Vettel, the Briton's time of 1:21:060 set with seven minutes of the session left. Vettel's teammate, Mark Webber, did not set a strong enough time and ended up eleventh and out of qualifying, as Nico Hülkenberg and Bruno Senna edged him out. Also out was Paul di Resta, Nico Rosberg, Sergio Pérez, Kamui Kobayashi, Jean-Éric Vergne and Michael Schumacher was 17th. The German's team, Mercedes had underperformed on the Hungaroring, with Schumacher's good qualifying form coming to an end.

Lewis Hamilton once again dominated the session, setting pole position with a time of 1:20.953, 0.413 seconds ahead of Romain Grosjean. This was the Frenchman's best ever qualifying result, and thus his first front row.

Hamilton's first quick lap of 1:21.260 was quicker than Grosjean's time.

Sebastian Vettel was third, his time being beaten by Grosjean at the end. Jenson Button, Hamilton's teammate, came in fourth. Kimi Räikkönen set the fifth fastest time, but he could have gone quicker.

Fernando Alonso and Felipe Massa were sixth and seventh, both setting just one timed lap. Pastor Maldonado was nearly a second down on Hamilton in eighth, while teammate Bruno Senna was 1.390 seconds slower than Hamilton. Nico Hülkenberg was very far down in 10th.

Lewis Hamilton's dominance of qualifying lead him to his 22nd career pole position and McLaren's 150th; while Romain Grosjean scored both Lotus and his own best grid position with second. The damage of championship leader Fernando Alonso sixth place on his title challenge was lessened as Sebastian Vettel could only manage the second row, while Mark Webber, second in the championship, went out in Q2 and started 11th.

*Schumacher had an engine malfunction at the initial (aborted) start. He started from the pit-lane at the restart.

As the car lined up for the gird, Michael Schumacher lined up incorrectly, then as the start was aborted, he switched off his engine, which required an additional formation lap, as starting race with a car that does not move off the grid is a dangerous procedure. Schumacher was wheeled off into the pitlane. The race distance was reduced by one lap.

As the race restarted, Lewis Hamilton made a strong start, as did Sebastian Vettel, who looked to have overtaken Romain Grosjean into turn 1. However, Grosjean battled for the position and this allowed Hamilton to maintain his lead despite locking up into the first corner, while Button managed to find a way past Vettel into turn 3. Fernando Alonso once again gained at the start, overtaking Kimi Räikkönen. At the back, Schumacher had a puncture, and had to pit. Schumacher was found to have gone too quickly in the pit lane and received a drive-through penalty.

Not much happened early on. Timo Glock spun and lost two positions, to the HRT drivers. Unfortuanately, despite the increased overtaking this year, with no rain, there is no real action at the Hungaroring.

Of the leaders, Button was the first to blink, pitting on lap 15 after running wide at turn 4. Hülkenberg also pitted. Senna and Nico Rosberg (11th) were next on lap 16, Rosberg getting ahead of fellow German Hülkenberg. Vettel finally reacted to Button on lap 17, but emerged behind the McLaren driver. Alonso also pitted on lap 17. Hamilton pitted from the lead on lap 18, with Massa following him in from a temporary fifth place. Grosjean reacted on lap 19, but the Brit had taken advantage of the undercut to extend his lead. Räikkönen pitted from the lead on lap 20, followed by Webber. While Räikkönen got ahead of Alonso, Webber did not.

Grosjean worked on closing the gap to Hamilton, the Frenchman setting two fastest laps, before making errors and losing time once again. Vettel was chasing Button, but unable to find a way past. Vettel was getting annoyed, feeling he was faster than the Brit, and asking his team to do something. Button was the one to do something, McLaren putting their driver on a three-stop strategy, a move which Button questioned post-race as he got stuck behind Senna, who was driving a strong race. Unable to find a way past, Button lost the position to Vettel.

In an attempt to get past, Grosjean pitted a lap earlier than Hamilton, but Hamilton emerged ahead after unually slow stops from both drivers. Räikkönen was left in the lead, and set a few fast laps to take second place from Grosjean after the Lotus pair fought for the position in turn 1 and 2. Grosjean was fighting Vettel for third.

Button had pitted a third time and he emerged behind Alonso, who was having a quiet race. Webber later pitted a third time from fifth, and came out behind Senna. Pastor Maldonado was penalised after forcing Paul di Resta off the track, yet another poor show of racecraft from the Venezuelan.

Räikkönen pressurised Hamilton, but was unable to find a way past the McLaren, who was saving his fuel and his tyres while heading for victory. Vettel pitted a third time on lap 58, emerging just ahead of Alonso, fighting up until turn 4 for fourth place. Vettel, after getting away, became the fastest driver on track, setting a few fastest laps.

Schumacher became the first driver to retire on lap 58, a lap down, his car being pitted and put into the garage. On his lap 60, Narain Karthikeyan (who was three laps behind the leaders) crashed at turn 4.

Hamilton used his extra fuel and well-kept tyres to pull away from Räikkönen in the last few laps to take victory. Grosjean completed the podium, Vettel catching up the Lotus driver. Alonso managed to hold off Button, who was a few seconds ahead of Senna, who held off Webber well. Massa came ninth after a slow final lap. Rosberg was nearly 15 seconds down on Massa, but took the final point. Hülkenberg came 11th, ahead of his Force India teammate Di Resta, who got back ahead of 13th-place Maldonado after the Williams driver took his penalty. Sergio Pérez followed Maldonado home. Daniel Ricciardo was ahead of teammate Jean-Éric Vergne once again, both a lap down; Heikki Kovalainen came in 17th. Kamui Kobayashi was classified 18th after stopping two laps before the finish with hydraulic issues. Vitaly Petrov was 19th, ahead of Charles Pic and Glock, while Pedro de la Rosa brought up the rear.

Lewis Hamilton's win, the 50th for a British driver driving for McLaren, pushed him up to fourth place in the title race, one point ahead of second-placed man Kimi Räikkönen. Fernando Alonso extended his lead up to 40 points, as his finished ahead of Mark Webber and did not lose enough points to Sebastian Vettel, the other close challenger.

Red Bull-Renault's lead in the title chase remained at 53 points, but now ahead of McLaren-Mercedes and not Ferrari, who were also overtaken by Lotus-Renault.

Laps in the Lead[]