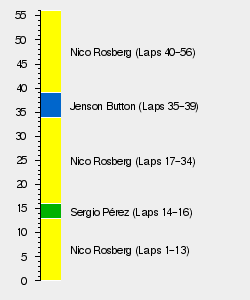 The full entry list for the 2012 Chinese Grand Prix is shown below:

Qualifying for the third race of the season began at 2pm local time under cloudy and overcast conditions with an ambient temperature of 21 °C (70 °F) and a track temperature of 26 °C (79 °F) (significantly cooler than the previous Malaysia qualifying session). Prior to the start of Q1 Ferrari spoke with Sky Sports commentator Ted Kravitz and said "they need a miracle to get into Q3 today" highlighting just how far the prancing horse team think they are from the front runners.

The first session begun with Force India driver Paul di Resta posting the first timed lap of the session. Other drivers followed soon after all on the harder medium 'prime' tyre. The difference between the medium and the soft compounds was predicted around 0.8 seconds per lap. Leaving their run late, eight minutes into the session both the Red Bull and Mercedes cars were yet to post timed laps. Sebastian Vettel's engineer was heard saying that the lap time he did of 1:36.9 would be good enough to make Q2, subsequently it was the 15th best time of the session. With Felipe Massa in P16 after his run on the prime tyre, he was among the first to switch to the grippier soft compound 'option' tyre. His teammate Fernando Alonso followed suit soon after. Surprisingly, Jenson Button undertook a lap on the soft tyres during Q1 even though looking like comfortably progressing to Q2. At the end of the session, Vergne for the second consecutive race failed to make Q2 and was 18th ahead of the usual eliminated cars. In fact all the eliminated cars in Q1 were in identical positions from the Malaysian Q1 qualifying session. Heikki Kovalainen led teammate Vitaly Petrov and Timo Glock led the Marussia's while at the rear were Pedro de la Rosa and Indian Narain Karthikeyan.

For the second session, the two Sauber's and Kimi Räikkönen were frist to set timed laps. Romain Grosjean was late to post a lap as he made a mistake on his first attempt and pitted for a new set of option tyres. Vettel, in 6th midway through the session, was told on the radio that his current time would probably not make it into Q3. With less than 2 minutes remaining only the Mercedes (P1 and P2), Lewis Hamilton(P3) and Räikkönen(P4) remained in the pits, while everyone else scrambled to get into the top 10 for Q3. Vettel was in 7th as the chequered flag fell however, many cars were still on flying 'hot laps'. Sergio Pérez jumped into Q3 as did Grosjean from P17 (only needing one timed lap). In a huge shock, Vettel who was on pole for the last three consecutive Chinese grand prix's failed to make Q3. On his final lap he only improved his time by 0.003 of a second. It was the first time since Brazil 2009 (where he qualifyed 16th) Vettel failed to make the top 10 (and hence the final Q3 session). This brought his streak of 41 consecutive qualifying sessions to make the top 10 to an end. It was also in the same race last year that Mark Webber failed to make Q3 hence the first time in 18 races where a Red Bull has failed to make the top 10. Following Vettel in 11th was Massa in 12th (the same as Malaysia) and the two Williams cars (Pastor Maldonado and Bruno Senna) who were within 0.006 seconds of each other. In P15 and 16 were the two Force India cars led by di Resta while Australian Daniel Ricciardo was last in the session in a clearly uncompetitive Toro Rosso.

For the final session, the track was cooling down and German Nico Rosberg was told to think about that in his warm up lap. He was the first to set a timed lap early on with six minutes remaining in the session. Interestingly, the top speed of his car down the long back straight was only 314kph as he hit the 7th gear rev-limiter meaning that Mercedes cars didn't have the highest top speed but rather made up time through a better acceleration through the f-duct system as he was one of the quickest past the start/finish line speed trap. Rosberg posted a 1:35.121 which was by far the fastest time of the weekend so far. Teammate Michael Shumacher was half a second slower than Rosberg as was Hamilton, further highlighting how good Rosberg's lap was. Shumacher on his radio was told Rosberg's lap time and in reply said "not bad". After seeing Webber more than a second off his fastest lap time, Rosberg got out of his car with just under two minutes still left in the sesson. After confidently leaving his Mercedes, Rosberg watched everyone else fall short of his time and claimed his first pole position of his 111 race career. Following him was Hamilton half a second off (who lined up 7th on the grid after a gearbox change inccured a 5 place grid penalty) and teammate Schumacher in 3rd. Kamui Kobayashi qualifyed 4th fastest in his best ever qualifying result of his Formula 1 career to date. His previous best qualifying result was 7th in his home race at Japan 2011. Räikkönen, like in Malaysia, posted the 5th quickest time while Button was more than a second from Rosberg's time in P6. Webber in the Red Bull was 7th while Sergio Pérez in the second Sauber was an impressive 8th with - like his teammate - his best ever qualifying result in his Formula 1 career to date. His previous best was a P9 in Belgium 2011. Alonso like Räikkönen was in the same position as the Malaysia qualifying session and lined up on the grid in 9th while Grojean in the second Lotus didn't complete a timed lap and hence was 10th. In another milestone, it was the first time that both Sauber's had qualifyed in the top 10 since the 2009 when team were known as BMW Sauber.