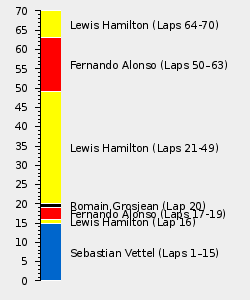 The 2012 Canadian Grand Prix (formally the Formula 1 Grand Prix du Canada 2012) was a Formula One race that took place on June 10th, 2012 at the Circuit Gilles Villeneuve, Montreal, Canada.

In the constructors' championship, Red Bull-Renault lead McLaren-Mercedes by 38 points.

The full entry list for the 2012 Canadian Grand Prix is shown below:

Lewis Hamilton set the fastest time in FP1, over a tenth of a second quicker than second-fastest Sebastian Vettel, who only set his fastest with a few minutes remaining. He and Bruno Senna were investigated by the stewards, as Vettel held up Senna before the last chicane, but no action was taken. Heikki Kovalainen crashed 50 minutes into the session at turn 9, which stopped the session for ten minutes. Jenson Button's car had an oil leak in the morning, and McLaren have had to change the seal on his car's gearbox, although he was able to do some running in the practice session.

As in FP1, Lewis Hamilton topped the timesheets, this time ahead of Fernando Alonso. Also similar to FP1, there was an accident about fifty minutes into the session, as Bruno Senna crashed his Williams into the Wall of Champions (the right-hand wall of the start/finish line), bringing out a red flag. Fifteen minutes later, the session was restarted. Jenson Button managed to get his some distance in his McLaren MP4-27 after his car underwent more repairs, although his lap times were not ideal, and he was ninth-fastest in the session.

In a relatively uneventful session, Sebastian Vettel came top, but the top seven cars were within just four tenths of a second. Fernando Alonso set the second best time, and Lewis Hamilton came in third-fastest. The only incidents involved Nico Rosberg after about five minutes, with a fuel connector issue; and Jean-Éric Vergne after roughly fifteen minutes, when he crashed at turn two. Both incidents brought out yellow flags, and neither driver set a time during the session.

Sebastian Vettel was fastest in the first qualifying session. The Caterhams of Heikki Kovalainen and Vitaly Petrov came 18th and 19th, Jean-Éric Vergne was the unlucky non-new team driver out of Q1, in 20th, HRT's Pedro de la Rosa (21st) beat the Marussias of Timo Glock (22nd) and Charles Pic (23rd). Narain Karthikeyan in the other HRT came 24th and last.

Sebastian Vettel set pole position over Lewis Hamilton, beating him by three-tenths of a second. Ferrari driver Fernando Alonso qualified third. Vettel's Red Bull team-mate Mark Webber came in fourth. Fifth was Nico Rosberg, just ahead of Felipe Massa. Romain Grosjean, the sole Lotus in the top 10, qualified seventh, ahead of the only Force India in the Q3, Paul di Resta. Ninth was Michael Schumacher, and a long way back in tenth was McLaren driver Jenson Button.

Pastor Maldonado had his gearbox changed, which resulted in a five-place grid penalty.

* Pastor Maldonado was demoted five places on the grid for a gearbox change.

The race started without incident, with Sebastian Vettel holding his lead from pole. The first round of pit stops started on lap 13 with Felipe Massa coming in. When the three leaders, Vettel, Lewis Hamilton and Fernando Alonso pit in that order, the come out with Alonso in front, Hamilton behind and Vettel in third of the leaders. Hamilton overtakes Alonso, and inherits the lead when Romain Grosjean pitted. Hamilton then set a string of fastest laps to stretch his lead to four seconds in fifteen laps.

Narain Karthikeyan was the first retirement, who retired his car with braking issues a few corners after spinning in turn 1. Karthikeyan's HRT team-mate, Pedro de la Rosa retired a laps later, also with brake issues. On lap 45, Michael Schumacher's DRS jammed open, forcing him to retire. About the same time, Toro Rosso's Jean-Éric Vergne was handed a drive-thorugh penalty for speeding in the pit lane.

On lap 50, Hamilton pitted, and emerged in third place, ahead of fourth-placed Mark Webber, just as Hamilton was coming up to lap his team-mate, Jenson Button. Hamilton then started to set a string of fastest laps. Timo Glock retired on lap 60, with brake issues, like the HRTs. Eventually, on lap 62, Hamilton catches Vettel and takes second place with the aid of DRS. Vettel pits on lap 63, and falls to fifth. Hamilton overtook Alonso with DRS on lap 64. On lap 66, Grosjean, on the same strategy as Alonso, speeds past with ease. Sergio Pérez passed Alonso, who was finishing the race about four seconds slower than his rivals. Alonso was passed by Vettel at the hairpin on lap 69, not even needing the DRS.

Hamilton won the race to become the seventh winner in seven races. Second was Grosjean, and Pérez completed the podium. Vettel came fourth. Alonso came in fifth, only 0.4 seconds ahead of Rosberg. Webber was seventh, Räikkönen eighth, Kobayashi ninth and Massa tenth. Button came in 16th, a lap down on his team-mate.

The win propelled Lewis Hamilton into the lead of the world championship, on 88 points, but by just two points over Fernando Alonso on 86 and three ahead of Sebastian Vettel on 85.

Red Bull-Renault still lead the constructors' championship, but with their lead reduced to 31 points ahead of McLaren-Mercedes, and Lotus-Renault took third place back off Ferrari as passed the 100 point mark.

Retrieved from "https://f1.fandom.com/wiki/2012_Canadian_Grand_Prix?oldid=75011"
Community content is available under CC-BY-SA unless otherwise noted.